Saffron Health Benefits: Learn About the Myriad Benefits of the ‘Expensive’ Spice, Side-Effects and Dosage

Know how saffron is beneficial for the human body, and how much of it is actually healthy to consume

Come weekend and sweet lovers rush to their favourite confectioners to satiate their taste buds with their all-time admired saffron jalebis and saffron puddings. If you have a host of guests to celebrate festivities and functions, but wondering what to cook? Why not try out some rice biryani with saffron mixture blended on the top? A wonderful flavouring agent and the pungent smell can lead to some jaw-breaking inspiration for your guests. Saffron is a nutritious spice which has a ton of benefits, apart from adding a sweet, delicious texture to your food. The spice is indeed an example of a nature blessing as is rarely found and serves as a precious ‘gem.’ In the article below, let us learn about the benefits, side-effects, dosing and nutritional potential to the miracle spice.

What is ‘Expensive’ Spice? 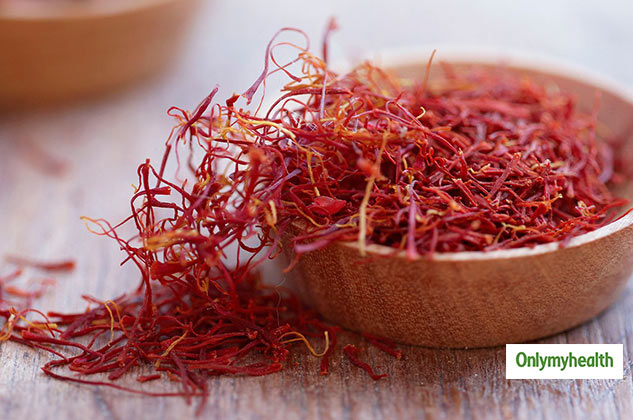 Saffron is commonly a spice derived from the Crocus sativus flower, a cousin of the plant lily. The variety of hues known as stigma and styles, referred to as threads are gathered and dried for use as a seasoning agent and to add colours in food. The dried stigmas of the plant in the form of thread-like parts are preferred to make saffron spice to add rich aroma to food. In order to produce a single pound of saffron spice, we require around 75,000 saffron blossoms. Considered as the world’s most expensive spice by weight and usage, considerable doubts remain on its origin and place of birth. Cultivators usually harvest the delicate threads from each flower manually. They further heat and extract the threads to derive the true flavour of the spice. People have been using saffron from ancient times for a variety of uses, to treat depression, anxiety, Alzheimer’s disease, menstrual cramps (dysmenorrhea), and premenstrual syndrome (PMS). Saffron is used in popular cuisines as a spice with the yellow food colouring agent used as a flavouring agent.

Saffron is commonly used in dried or powdered form, but, saffron supplements can also be obtained from particular herbal food stores. The spice can be consumed in smaller quantities, with the maximum amount between 0.5 grams and 1 gram in a day. The spice can involve massage, or be used in sauces, broths, hot and flavoured drinks or medicinal pills. Pill supplements can be found in a variety of locations including herbal stores or nutritional points.

Saffron can be obtained in a variety of forms, such as “Spanish Superior” and “Crème,” mellowish in colour and flavour, or Greek saffron cultivated in Krokos with a quality enriched colour and flavour. “Mongra” or “Lacha” saffron of Kashmir is another specific type and the most difficult to obtain for consumers and is famous for its darker, maroon purple hue.

Highlighting the benefits of saffron (kesar), Dr. Chetna V. Jain, Nutritionist, Bangalore, states to Onlymyhealth, thus, “Kesar consists of good amounts of Vitamin C, iron, magnesium, potassium and manganese. Its primary properties include antioxidants, considered good for the skin and increasing libido in both men and women. The spice is safer to consume at a minimum dosage of 1 to 1.5 grams and reduces cholesterol and blood pressure.”

Saffron is a rich spice consisting of specific antioxidants useful to boost mood and fight stress. The spice is safe for most people to consume and add to their diet. Let us delve deeper to learn of the amazing health benefits of the rich spice:

Spices not only add flavour to your diet, but are rich sources to boost immunity and metabolism as they contain higher concentrations of essential nutrients like Vitamin C. Studies indicate ascorbic acid as necessary for human health, as it stimulates the immune system and production of white blood cells, as the major line of defense against illnesses. Vitamin C also aids in the production of collagen, necessary for cellular production and healing of wounds, apart from muscle growth, repairing of blood vessels and production of tissues. 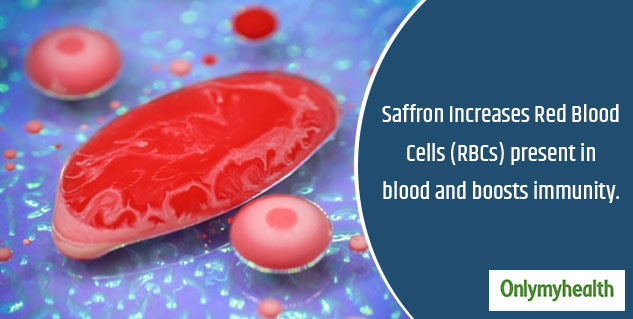 Saffron works as an effective energy stimulator and increases metabolism by increasing circulation of blood. Higher concentration of iron present in saffron increases Red Blood Cells in the body, thereby stimulating circulation and providing oxygen to vital organs. This in turn, promotes functioning of tissues and organ systems to boost heart health and metabolism. Rich content of iron present in the compound decreases risks of anaemia.

Saffron has immense health benefits in terms of the number of antioxidants present which include, crocin, picrocrocin and safranal along with other compounds which include kaempferol and crocetin, which help provide immunity against oxidative stress and free radicals. Research denotes compounds like crocin to reduce inflammation and protect brain from oxidative damage. Study published in journal Antioxidants denote that saffron help with symptoms of Alzheimer’s due to the wide range of memory enhancing and anti-inflammatory effects. 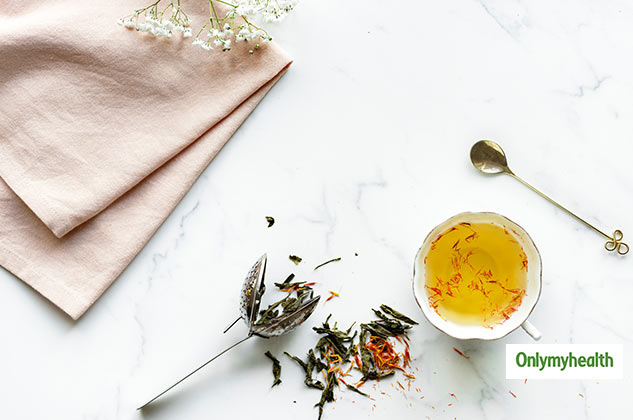 Components of saffron exerting antidiabetic responses include crocin, crocetin, and saffranal. The compounds bear insulin-sensitizing effects and prevent excess glucose accumulation in the blood. Antioxidant properties of saffron help patients with hyperglycemia and oxidative stress. The antioxidants manage common symptoms of diabetes and can be beneficial in cases of diabetes-related encephalopathy. 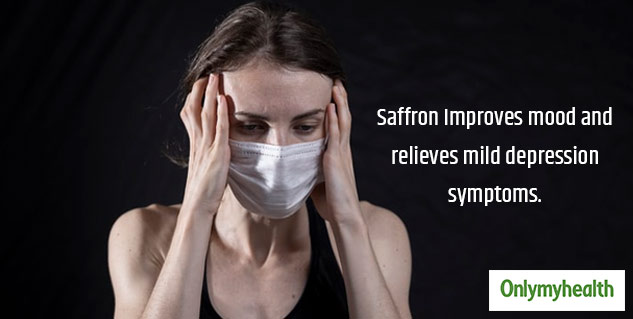 Saffron has potential health benefits in terms of relieving mild depression and improving mood in people who consume it on a regular basis. Active compounds present in saffron have beneficial effects for the immune system by necessitating the release of hormones triggering our mood and keeping us mentally fit and healthy. The effect is known to act as an aphrodisiac in women and has been called as a natural antidepressant.

Saffron may also reduce symptoms of premenstrual syndrome (PMS). A 2015 review focusing on the research and symptoms of PMS on women indicates that women between the ages of 20 and 45 years consuming 30 mg of saffron each day noticed fewer symptoms.

Presence of some minerals and organic compounds in saffron optimises the uptake of nutrients such as calcium. Amount of calcium absorbed from food has a better chance of improving bone mineral density and preventing the onset of bone related deformities such as osteoporosis. Compounds present in saffron also helps to reduce other degenerative age-related illnesses.

Side-Effects and Risks Involved in Consumption

Enumerating the side-effects of kesar, Dr. Chetna adds, “Side-effects of kesar are mostly related to anxiety, sleepiness, drowsiness, nausea, vomiting, etc. More than the required consumption may lead to diarrhoea. As saffron consists of high amounts of potassium, excessive consumption is likely to affect kidneys. The safer dosage is 1.5 grams in a day.”

Although, the consumption of saffron carries little risk, cooking with saffron by adding it as a spice prevents the risks involved with excessive consumption. Normal recommended dosage is about 1.5 grams of saffron each day, but eating too much of the said spice can be toxic. Researchers denote 5 grams to be an excessive amount.

Consumption of extremely high dosages can be harmful for certain sections of people including women. Studies indicate pregnant women to avoid consuming more than 5 grams of saffron in a day as the compound has a stimulating effect on uterus. Moreover, there are chances of allergic reactions arising from eating saffron. 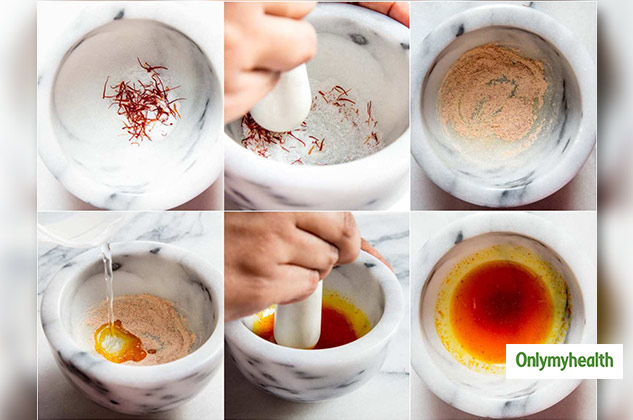 How to Use Saffron?

An easy method to supplement a meal with saffron is by adding a few strands to a bowl of hot water. The process extracts most of the flavour from the spice. So, a person can typically include both water and saffron to a dish at the end of cooking the meal. Saffron is commonly available as a supplement in the form of powdered stigmas or as capsules. Consumption of newer supplements should be taken while measuring the risks involved.

Saffron is an ancient herb containing plethora of useful benefits and antioxidant properties. These help to eliminate risks of chronic diseases and compounds associated with oxidative stress. Although, there is little evidence to support the fact that the antioxidants are more beneficial to the body than consuming it along with fruits and vegetables. Saffron can be harvested under suitable conditions of growth and boosts metabolic activities as a natural spice. So, one can rely on the herb for its magical properties and beautiful aura.