Ashwathy Murli is a tribal girl who used community radio as a medium to spread awareness regarding covid-19 vaccination and its importance.

What: Aswathy Murali spread the message of vaccination against COVID-19 through Community Service Radio - Radio Mattoli

Why: Ashwathy  helped bust myths and was instrumental in alleviating vaccine hesitancy among the tribal communities

With 3.59 crore cases and 4.84 lakh deaths the COVID-19 pandemic has reached every corner of India and has affected every Indian in some way or the other. Big metropolises, small cities and towns, villages and even the secluded tribal belt have borne the brunt of coronavirus.

The Challenge For The Paniya Adivasis

On the southern tip of the Deccan plateau, nestled among the mountains of the Western Ghats, lies Wayanad - the land of the paddy fields and home to an ancient Adivasi tribe, Paniya. The Paniya, is a scheduled tribe, and are the poorest of the poor with little connection with the modern world and people outside their district. They have their own customs, rituals and even a different language. Adivasi communities have traditionally depended on the forest for all their needs rather than modern medicines. So when the pandemic gripped the country, it was a challenge to communicate with them, let alone educate them about the pandemic, COVID-19 appropriate precautions and address vaccine related hesitancy.

A Ray Of Hope

Ashwathy Murli, a 22 year old perky girl from the Paniya Adivasi community came to the rescue. Ashwathy had been working with the Community Radio Service, Radio Mattoli 90.4 FM as a radio jockey and tribal program producer for 3 years. So when the local administration and Radio Mattoli decided to distribute radio sets in the adivasi village, she worked as a bridge not only translating the language but convincing the villagers to use the radio. 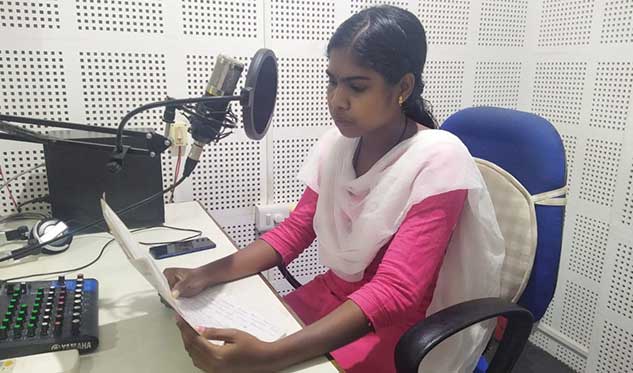 The Radio’s static crackled and the villagers heard the radio jockey welcoming them in their own dialect. “Namaskara! I am Ashwathy Murli from Radio Mattoli’s live phone-in programme”. When the villagers heard someone from their community addressing their queries about the pandemic, they believed, understood and acted upon it.

The Message Retained In Translation

However the endeavour got a setback when the second wave hit India. Ashwathy could not make the hour and a half long journey from her village Athirathil to the radio station, but this didn’t dampen her enthusiasm. Seeing Ashwathy’s drive to do something for her community, Father Bijo Thomas, Station Director of Radio Mattoli, sent a laptop for her to work from home. Ashwathy heard radio programs where doctors talked about COVID-19. Most of these programs were in English, so she made a note of the information about the virus infection, its symptoms, safety precautions and protocols and translated it through Google and finally wrote it in Paniya language in a way that was easy to understand. She recorded and edited the content and sent the recording for the radio broadcast. 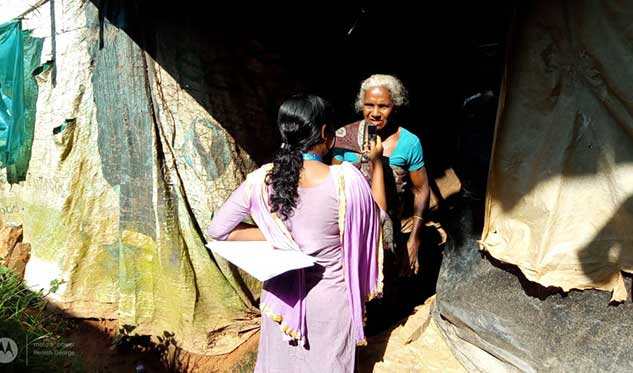 Ashwathy spread awareness, bust myths and shared COVID-19 related safety precautions with the Paniya adivasi villagers. Her message was simple: “Prevention is better than cure” and the motto was “Our health is our responsibility.” On the themes shared by the National Health Mission, Ashwathy created skits and jingles. The skits always had characters relatable to the Paniya adivasis, like a farmer in the village. Ashwathy’s audience cuts across all age groups and community members get glued to their radio sets when she interacts with them through a live phone-in programme.

From Radio Station to The Forefront

Not satisfied with spreading the message through the radio, Ashwathy along with the Radio Mattoli team went from door to door in the village. She covered 75 houses, standing outside at a safe distance reiterating the COVID-19 safety precautions and busting vaccine related myths. Few even told her off and asked her to leave. The Paniya adivasis have their own beliefs and customs and were hesitant to get vaccinated. Convincing Paniya’s who thought that nothing would happen to them, was an uphill task. but what was really challenging was for Ashwathy to convince herself to get vaccinated. Afterall she is a Paniya adivasi too! Ashwathy realised that if she didn’t get vaccinated she can’t convince villagers for it as well. Setting her own fears aside, Ashwathy got vaccinated first and later made her grandmother and rest of her family understand its importance as well. She told the villagers through the radio that people experienced mild fever and body pain after the first shot and no side-effects after the second shot. Inspired by one of their own getting fully vaccinated the community's fear was allayed and finally the whole village came forward. 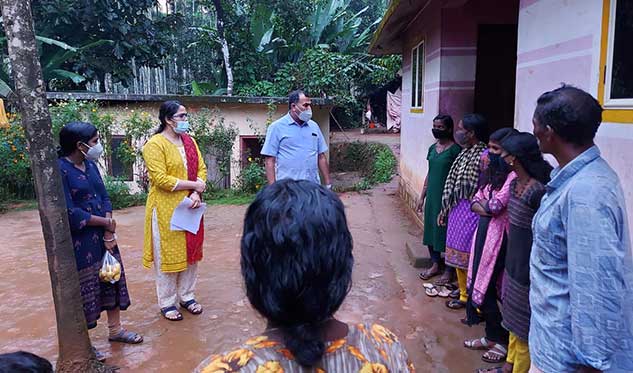 Appreciation From The Government

Ashwathy received high praise from none other than the Prime Minister Shri Narendra Modi, who lauded her work. Ministry of Health and Family Welfare in their tribute to COVID-19 workers in India’s fight, named Ashwathy in ‘Sentinels of the soil’ - a coffee table book commemorating the selfless & tireless efforts of the COVID warriors. MyGov India shared her story on YouTube, which was also tweeted by the Press Information Bureau, Kerala. Kerala DD News also shared a news segment about Ashwathy’s work and the accolades she received. However, when Fr. Thomas informed Ashwathy about the accolades she had received; she thought it was a prank the station director and her colleagues were playing on her. It was only after she saw the news clip from Kerala DD News and other channels started calling her that it finally sunk in. Recently the President of the Gram Panchayat in Wayanad District, has submitted Ashwathy’s nomination for the Youth Icon Award 2021-2022.

Ashwathy wants to continue serving her community and would like to teach the village children in the future. She is inspired by her single mother who raised her and her younger brother, and taught them “to do something for others”.

If Ashwathy Murli’s work during this pandemic has inspired or moved you, do cast your vote for her. Here is how you can vote for your favorite nominee for Jagran New Media & OnlyMyHealth’s Cofsils Presents HealthCare Heroes Awards 2021.

MORE FOR YOU
7 Tips To Moisturize Dry Hair
Does Quality Of Sleep Affect Body Weight?
5 Home Remedies For Sweaty Hands And Feet In Summers
4 Reasons Why You Should Not Get Wet In The First Rain Of The Season
Is Tuberculosis In Children Different From Adults? Know The Symptoms, Causes, Treatment
6 Secret Side Effects Of Missing Breakfast