Healthcare Heroes Awards 2022: Chinu Kwatra Serves One Meal A day To Over 1,000 Kids Each Day

Chinu Kwatra is feeding kids daily under the initiative 'Roti Ghar' which makes him a Poshan warrior. Read his story here.

What: Distributes food among the underprivileged kids every day

Why: For distributing healthy one-time meal to thousands of underprivileged kids each day

From distributing food to 100 underprivileged kids on his birthday to serving it to 1,800 kids per day across four states, it has been quite a journey for social activist Chinu Kwatra. The 31-year-old from Maharashtra’s Thane started the initiative ‘Roti Ghar’ with a few of his friends in 2017. The intent was to provide a one-time nutritious meal to the underprivileged kids, and in turn, tackle malnourishment. But in 2020, it wasn’t just the kids that he fed, but the 8 lakh labourers and their families who got stuck during the COVID-induced nationwide lockdown across cities.

For his phenomenal work both during the COVID outbreak and otherwise, Chinu Kwatra has been nominated for Onlymyhealth’s Healthcare Heroes Awards in the category ‘Poshan Warriors’. This is his story:

‘Wanted To Do Something About Malnourishment Among Kids’: Chinu Kwatra

The journey of Roti Ghar began in August 2017. On his birthday that year, Chinu fed about 100 underprivileged kids. It took just about Rs 3,500 to feed those kids a simple meal of dal and rice, which is Chinu’s favourite. “It was then that I thought that with an amount that we generally spend during a party of 3-4, about 100 kids can be easily fed a meal of tasty, nutritious food,” he tells Onlymyhealth 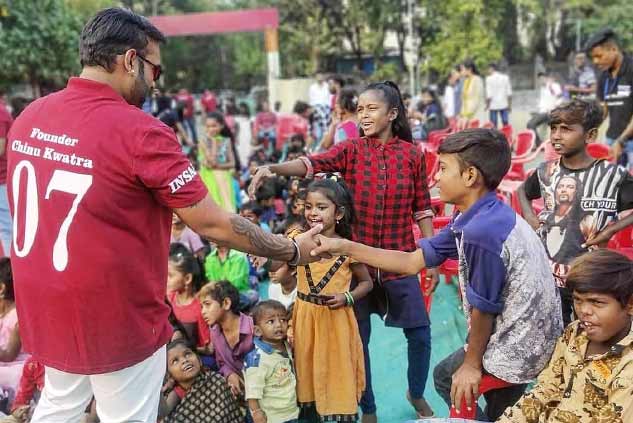 Chinu decided to formalize this initiative

What followed was four months of planning and brainstorming, and it was on December 6, 2017, that Roti Ghar, as an initiative, was born. “I wanted to do something about malnourishment among kids,” Chinu said. It’s sad, he added, that “despite India being among the largest food producers, the level of malnourishment is so high.”

Chinu was sure about one thing from the beginning that no surplus food from weddings and birthday parties would be distributed among kids. “I’ve worked in the hotel business. And I know that the food prepared at weddings is laced with preservatives to make them last,” he said. Chinu’s intentions were more than tokenism, his focus was on nutrition as well. “So, we decided we would prepare our own food. Since my dad has a dhaba in Thane, it was a bit easier for me, financially,” he said.

On being asked what was the idea behind the name Roti Ghar, Chinu says, “I’m a Punjabi, and we don’t say, ‘khana de do’ (give me food), we say, “roti de do” (give me chapatis), and ghar (home) is full of love and pampering, hence the name,” he said. Under the initiative, about 1,800 kids are fed across four places - Mumbai, Delhi, Bengaluru, and Odisha, and it all officially started in the year 2017. 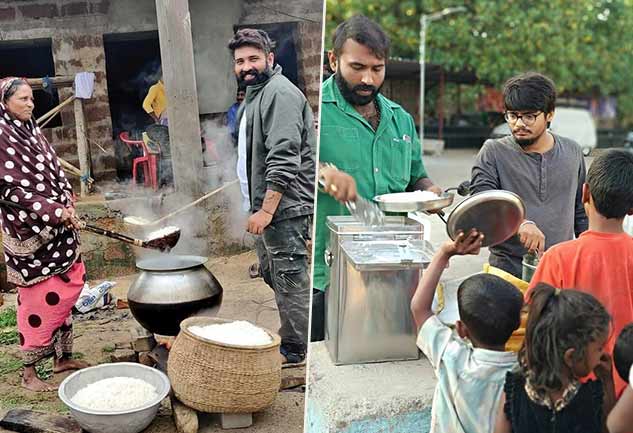 “It was in 2010 when I was in class 10th when my family incurred a huge financial loss. We didn’t have food to eat for three days,” he said when asked about the inspiration for Roti Ghar. Also, 2014 was when he suffered from severe depression. And it was teaching the kids during that time, which healed him considerably. “It was when I was teaching them that I realised that the first need of any child is food,” he said.

Feeding a family can be a task, how did he manage financially to feed so many kids, was the next question he was asked. “Feeding 100 kids with one meal costs about Rs 3,500,” Chinu said. It was through WhatsApp and the various social media platforms that he got the support and raised enough money to feed those kids. “I didn’t come on Facebook, Instagram for ‘dosti-yaari’ (making friends), but to showcase my work, so that more and more people would connect,” she said. He has now been trained under the FSSAI (Food Safety and Standards Authority of India), which “helps to keep my kitchen safe and hygienic,” he said. On being asked about the government support, Chinu said that although he’s in contact with the Maharashtra government, he’s yet to get any support from them. A person who did come forward to help was Congress MP Priyanka Chaturvedi. It was during the nationwide lockdown that she “connected with me on Twitter and asked us to open a kitchen for labourers,” he said. “I’m ready to open a kitchen but need funds for that,” Chinu told the Rajya Sabha MP, who connected him to people and also put a social media voice. “It was then that a lot of people got to know about Roti Ghar,” Chinu said.

During the 75 days of nationwide lockdown, about eight lakh people were fed across the four states through Chinu’s initiative. Ration was distributed among those who couldn’t be fed with meals, he said. So, Roti Ghar, which started in 2017 became what he described as a “pioneer” in 2020. Family support was solid throughout this journey, and it was that support that encouraged him to start the initiative in the first place.

Summing up the interview, Chinu had this message for our readers: “Insaan bano, sabse zyada sukh ussi mein hai” (Be a human, there is immense happiness in that).

We at Onlymyhealth give a big shoutout to Chinu Kwatra and his Roti Ghar for serving so many kids, and through them, humanity, in such a noble way.

4 Types of Dental Implants and Their Pros & Cons