What: Provide free ambulance services to people in Delhi-NCR for the past 20 years

Why: For providing free ambulances to people in Delhi-NCR for the past 20 years

While getting married in 2002, Delhi man Himanshu Kalia was offered a car, furniture, and home appliances in dowry. After telling his in-laws that he wouldn’t take a dowry when they insisted, Himanshu asked for an ambulance. So, outside his wedding venue stood a fully decorated ambulance. What prompted him to ask for it was his own experience. But two decades since, that ambulance has become his identity and that of his wife, Twinkle. Delhi’s ‘ambulance couple’, as they are called, offer free services throughout Delhi-NCR and have ferried over 70,000 patients in the past 20 years.

Celebrating their work, which helps with timely treatment to those in distress, Onlymyhealth nominates the ‘ambulance couple’, Himanshu and Twinkle Kalia for our Cofsils Presents ‘Healthcare Heroes Awards 2022’. They are nominated in the ‘Life Savers’ category. This is their story:

In 1992, when Himanshu was 14, his father met with a terrible road accident. After carrying him on an auto rikshaw to eight different hospitals in the national capital, and not being able to get him admitted to any of them, he and his mother took him to the All India Institute of Medical Sciences (AIIMS). The doctor there asked if they thought his father could be saved since a lot of time had elapsed, Himanshu told Onlymyhealth. The accident took place and 7 pm and they reached AIIMS at 2.20 am. His dad slipped into a coma. “On that day, it wasn’t just my father who went into a state of coma, my childhood, education, future, and whole life went into a coma,” he said. Upon contemplation, he realised if he had money or approach, he could get an ambulance to ferry his father so that he could get timely treatment. Thus, he prayed to God to save his father’s life and to make him capable enough so that he could save others from the misery he had to endure on that day. Gladly, his father came out of the coma, but only after two years, during which Himanshu toiled hard doing three jobs in a day to make ends meet and pay for his sister’s education. “Those two years changed my life completely,” he said. Since starting in 2002, Twinkle and Himanshu Kalia’s free ambulance service now has a fleet of 17 ambulances. Two of them are dedicated to carrying dead bodies, two for carrying bodies for post mortem, two for kids, three for COVID patients, and the rest for those who meet an accident. This has been done so that infection of one does not affect the others. Although they have hired drivers, three people are always available at any call: Himanshu, Twinkle, and his 70-year-old father.

On how they publicise their services, Himanshu said it’s largely mouth-to-mouth publicity since they have been operating since 2002. Even the Delhi Police call them if they find a dead body. Also, they have parked four of their ambulances, which have ‘24*7 free ambulance service’ written on them, at four different locations, so that people get to know about their services. During the COVID-19 pandemic, the ‘ambulance couple’ continued their service. It was a tough time for them as Twinkle was undergoing cancer treatment during that time. But no cancer could deter her from serving people. “Even though due to chemotherapy and radiation, her veins were damaged and she didn’t even have the strength to stand up, whenever we got a call, she stood tall carrying COVID patients,” Himanshu said. Not only that, but she also carried COVID victims and even arranged for the cremation of many of them.

Carrying patients on their ambulances is something the couple has been doing for the past two decades. However, during the two COVID waves, they took another initiative, to feed the needy. It was Twinkle’s idea to convert their control room into a kitchen in which 4,000 food packets were prepared daily. Again, they used their ambulances to carry food to the needy. Not only that, they distributed snacks and tea to police officers who were on the line of duty. “We got so many blessings. It was such an uplifting experience,” Himanshu said. 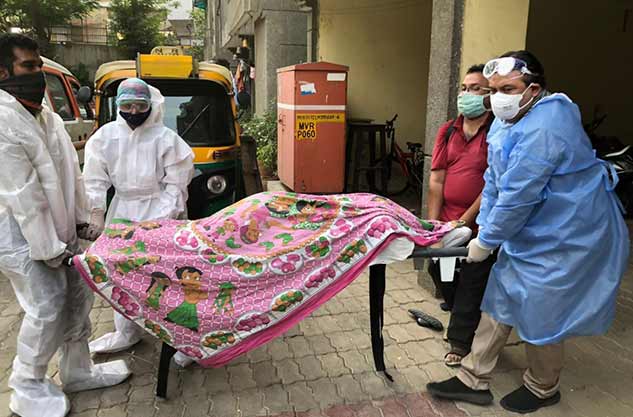 Both Himanshu and Twinkle are insurance agents. And their ambulance service is free of cost. But this doesn’t mean they don’t incur any cost. The vehicles need fuel, regular maintenance, and the drivers need to be paid. From whatever they make from selling insurance, they pay for these, and for what they don’t have money, they borrow.

On getting help, Himanshu cited three incidents when they were very hopeful of getting monetary help. One was when Twinkle was awarded by none other than President Ram Nath Kovind for being the first woman ambulance driver, he said, adding that she got Rs 1 lakh then. The second, was when Prime Minister called all the awardees. “He appreciated the work,” Himanshu said, but there was no monetary help, he said. The third was when ace actor Amitabh Bachchan called and appreciated their effort.

For their work through these years, the couple has got over 2,000 awards, not just nationally but internationally too. And we, at Onlymyhealth, too give a big shoutout to the ‘ambulance couple’ for their exemplary work through these years. If you too want their hardwork and dedication to be recognised, then don’t miss out on this opportunity and go vote for Twinkle and Himanshu Kalia.