2020 has been a roller-coaster ride where everything just revolved around COVID-19. Let us give you a glimpse of the spread of coronavirus.

The year 2020 has gone by so fast that it feels like we just skipped the year and entered 2021. The world got a major setback last year in the form of Coronavirus that took thousands of lives and millions of people are still fighting for life. Despite taking all the precautionary measures at the starting of the outbreak, India became one of the worst-hit countries by COVID-19. Two vaccines have come and a few more are slated for launch in the coming months. Let us take a look at the timeline of the coronavirus outbreak in the year 2020.

Let us brief you a little bit about the history of coronavirus. The outbreak happened in China and the first case was reported in December 2019. The novel coronavirus wasn’t identified previously in humans and was completely new. At that time, the cases were few and therefore, neither the Chinese government nor world health took it seriously. It was after the outbreak when thousands of people got infected and every day, hundreds of people were losing their lives, the world got the biggest shock of the year- Coronavirus. This was highly transmissible as compared to other viral outbreaks and the worst was that nobody knew about it! It took weeks to identify the virus and then months to find ways to prevent the outbreak. Coughing, sneezing, sore throat was identified as initial symptoms of COVID-19(The International Committee on Taxonomy of Viruses gave the official name to coronavirus on Feb ‘20). In the beginning, it was thought to be an autoimmune infection that attacks the respiratory system but as it progressed, this virus started to affect the whole body. As of 24th December, over 210 countries have confirmed that they have been affected by this virus. The count of affected people has crossed 80 million and over 1.7 million deaths have been reported so far. US is the worst affected country followed by Brazil and India.

On the date of filing this article, the total tally of cases in India is nearly 10 million. However, these are not active cases. As you can see from the graph, more than 9.5 million people have successfully recovered with 0.144 million fatalities recorded. The government took severe steps at the initial level to curtail further transmission of this virus but all went in vain as despite more 70-day lockdown imposed in the country. Several reasons were to be blamed but the government and medical industry extended their full support. The virus that started as an autoimmune infection emerged as a deadly pandemic. The virus can get severe so much that it may lead to a severe respiratory syndrome, pneumonia, multiorgan failure and death(in the worst case). 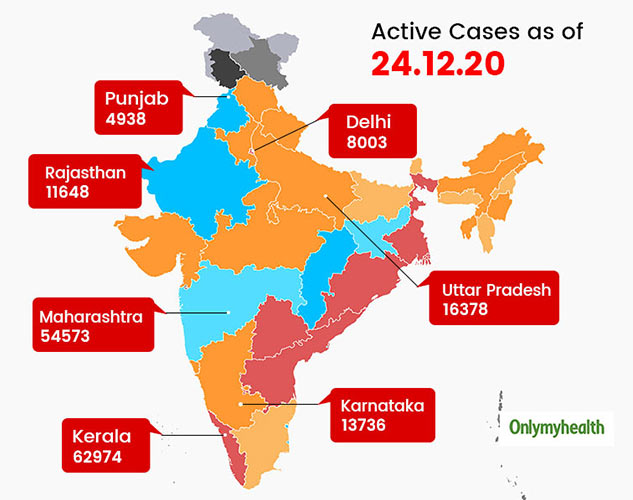 Timeline of Coronavirus in India

The first-ever case of coronavirus in India was identified on 30th January in Kerala. An Indian student studying at Wuhan University, China returned back home and got tested for this virus after showing the initial symptoms. Considering the new outbreak, the hospital staff handled him well and within 2 weeks, he was recovered and discharged from the hospital.

March marked the first case of COVID-19 in Delhi after which tourist visas were cancelled and foreigners who have travelled to China, Japan, South Korea, Italy were banned. It also saw the first COVID-19 death in karnataka. By the second week, the virus outbreak was declared as a pandemic by the World Health Organisation.

Look at the graphs below to know the total count of cases in Delhi and Maharashtra as of 24th December '20. 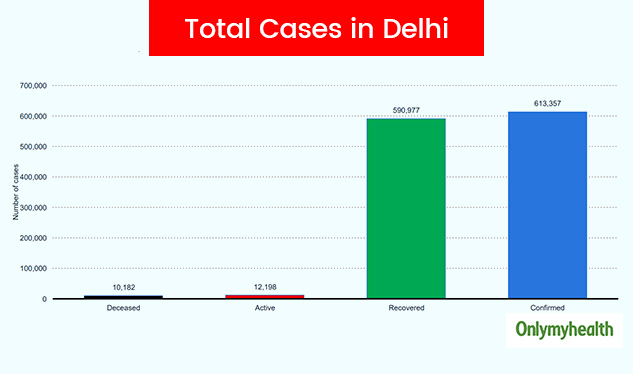 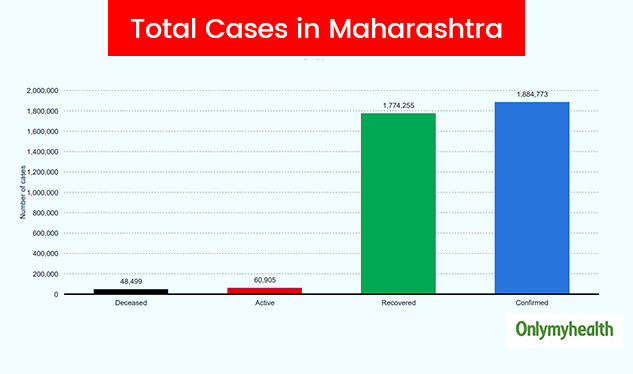 As the cases begin to surge, lockdown 2.0 was imposed with all the conditions remained. Only essential services were permitted but that too with some restrictions. However, this couldn’t control the count and by mid-April, the cases reached the 10,000 mark. By the time, mobile coronavirus testing vans were also deployed at different parts of the country to provide easy testing without needing to visit covid testing centers.

Also Read: There Are More Than 25 Symptoms of Long COVID-19, Know All Of Them 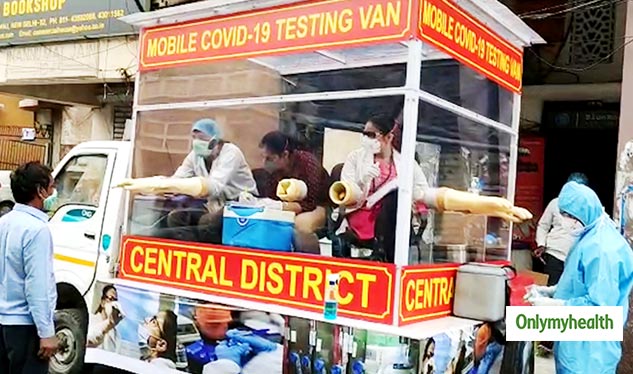 Considering the increasing cases, the government extended the lockdown for another two weeks.

the government did zone-wise division. The Green zone was the one with no case reported whereas the red zone was designated as COVID-19 hotspots. While some relaxations were given to green zones in terms of movement and activities, red zones were still kept under lockdown. 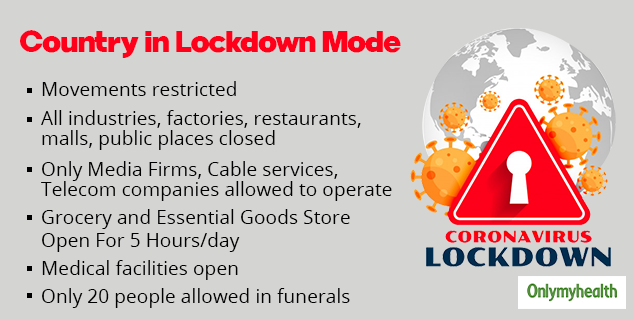 In the second week of June, the reopening phase started with Unlock 1.0.

India became the fourth worst COVID-19 affected country with 500,000+ cases and more than 2,000 deaths in a single day. However, keeping the huge economic losses in mind due to the super-long lockdown, the government decided to initiate the unlocking process. 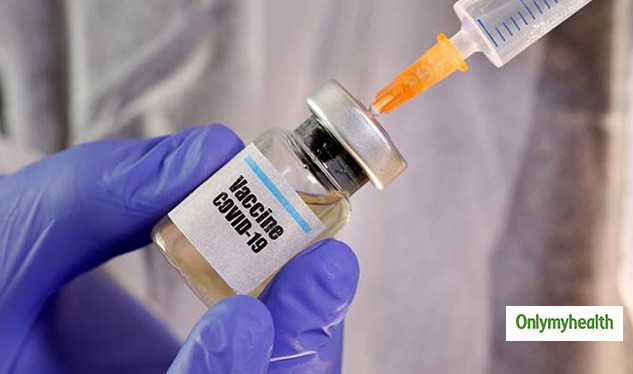 By August arrived, we crossed the 2 million mark on the cases tally and by end of the month, 3 million cases were registered. This was one of the peak months with the highest number of cases recorded in 2020. By this time, several Indian companies and organisations started to produce rapid testing kits. This was a great help as these kits not only reduced the cost of importing kits from other countries but these were Made-In-India and extremely affordable too. It slashed the testing cost to almost half.

September- The Worst Month In Terms of COVID-19 Outbreak

This month saw a 41.53% percent increase in the confirmed cases along with a 34% rise in deaths. This month turned out to be the worst period so far. However, along with that, the percentage of recovered patients also went up by 46%.

October- A Ray Of Hope

As compared to September, the number of infections significantly lowered in October. Over 18 lakh new cases were identified this month but it was less than previous months September(cases recorded 26.24 lakh) and August (20.18 lakh). By then, the third wave of COVID-19 infections started in the national capital. Also, for the first time, cases in Kerala recorded the highest number of cases followed by Delhi. It was speculated that the winter season might cause a steep rise in the cases but was happened was unbelievable! The cases dropped and how! November saw the lowest number of cases in the past four months and the death toll too decreased. Only 12.8 lakh new cases were recorded(32% drop) in November that brought a sigh of relief. Also, the fatalities were recorded to be 11,988 which was the lowest of five months. 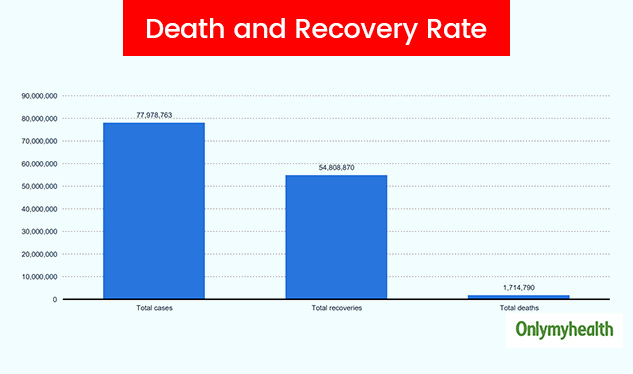 Amidst the good news, there came the bad news that a new strain of the novel coronavirus has been identified in the United Kingdom and it is spreading rapidly. After five passengers of the flight from the UK test positive at the Delhi airport, the Ministry of Civil Aviation banned all flights from the UK with effect from 22 December. The only good news that came was that the European Union gave green signal to the Pfizer-BioNTech coronavirus vaccine. With that, we shall expect the vaccine anytime soon. This would help in controlling the viral transmission of COVID-19 saving a lot of lives. Testing has played a very important role in handling the outbreak in the country. After testing began on a large scale, it became possible to detect the virus on time. Timely diagnosis can prevent the risks associated with COVID-19. Due to limited test kits, COVID-19 identification was slow in the initial months. But with rapid test kits, it became easier to test the suspects and curb transmission. As per the statistics, more than 158 million samples have been tested so far.

As we step into 2021, we pray for this virus to vanish soon. All of us need to stand strong during this difficult time and practice all the precautionary steps until this virus is eradicated or we get a vaccine to treat it. Be patient, live healthily and you can defeat coronavirus.

When To Wash or Sanitise your Hands? Know The Diseases Caused By Poor Hand Hygiene