Are Apple Seeds Poisonous To Humans? Read Dt. Shikha Mahajan's Take On This

How Poisonous Are Apple Seeds To Humans?

Does apple seeds contain cyanide? We all know that eating the apple is beneficial! There is also a saying that "An apple a day keeps the doctor away." But do you know that this apple can also be harmful? Some researchers have discovered that excessive consumption of apple seeds can lead to the death of humans. Let us study through this article that what happens in apple seeds due to which humanity can be harmed. What element does apple seed contain? Apples have small, dark seeds that are usually bitter, but people sometimes eat them by accident or don't bother to spit them out. But do you know that an element called Amygdalin is found inside apple seeds? When this element comes in contact with human digestive enzymes, it starts releasing cyanide. Let us tell you that there are sugar and cyanide inside the amygdalin and when it enters our body, it turns into hydrogen cyanide. With this cyanide, not only can you get sick, but you can also die. Shocking! However, there is no significant risk of accidentally eating apple seeds. Let us know further through this article.

“Every species on earth has evolved in a manner that will help protect it and advance their population. In plants, seeds are the most important part for their survival as a species as this is what helps grow new plants of the species. Most seeds are, for this reason, not well digested. Apple seeds contain an extremely potent defence mechanism of releasing cyanide if someone is eating it, thus forcing the consumer of the fruit to discard the seeds that can then become plants again”, explains Shikha Mahajan, founder of Diet Podium.

What amount of cyanide can be harmful in apple seeds?

Shikha Mahajan adds that, “one must bear in mind though that there is a grey area, while you may not consume 150-200 seeds in one go and thus it will not be fatal, a few seeds consumed can still cause you to feel unwell, cause nausea or dizziness etc.”. Cyanide is considered the world's deadliest poison. It has been used in mass suicide and chemical warfare. Many compounds that contain cyanide are called cyanoglycosides which are often found in fruit seeds, and amygdalin is one of them. The seeds of apple seeds and other fruits have a healthy layer on the outer side which is resistant to digestion. But if you chew the seeds, the amygdalin will run into the body and cyanide will be produced. Enzymes can detoxify small amounts in the human body. However, large amounts can be dangerous. Do you know that amygdalin or laetrile was used to treat cancer? But it was banned in the United States after reports of cyanide poisoning. 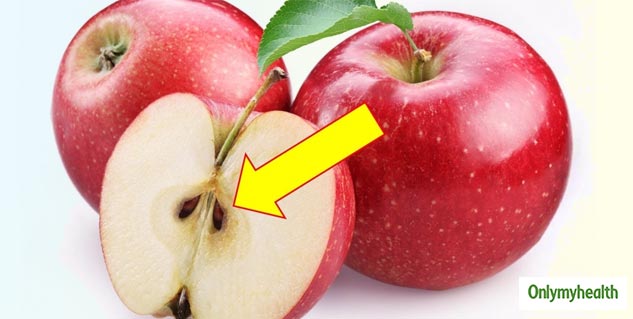 (The article has been medically reviewed by Dt. Shikha Mahajan, holistic nutritionist and founder of Diet Podium)

MORE FOR YOU
Kangana Ranaut Tests Dengue Positive; Know About The Complications Of This Disease
Study Reveals Best Time To Eat Dinner For Weight Loss
Probiotics Guide: Know When and How To Take Them To Avail Best Benefits
What is Langya Virus? New Zoonotic Infection Found In China, 35 Infected So Far
Skin-Like Computing Chip Examines Health Data With Brain-Mimicking AI
5 Health Benefits Of Drinking Coconut Water On An Empty Stomach

Are You Excited About Gyms Re-opening After Months? Here Are Some Do's and Don'ts To Follow