Shilpa Sahu, DSP posted in Chhattisgarh was pregnant when covid wave hit. She ensured that protocols are followed even during scorching summer heat.

Why: For braving scorching heat while being five months pregnant to ensure people followed COVID norms

A scorching summer day in April, the second COVID wave at its peak in India, a heavily-pregnant woman police officer standing guard on the roads of Chhattisgarh’s Naxal-affected Dantewada, making sure that lockdown rules were followed strictly. We all have seen this act of Deputy Superintendent of Police (DSP) Shilpa Sahu, a video of which had gone viral on social media in April last year. For the lady DSP, it might have been another day at work, but for people watching her on duty, and millions who watched her on social media, it was solid messaging. A message that “if in this condition, I can stand here to ensure your safety, then it’s your responsibility too to stay at home and ensure your safety.”

For raising awareness on COVID with such subtlety and bravery, Onlymyhealth nominates DSP Shilpa Sahu for our Cofsils Presents ‘Healthcare Heroes Awards 2020’ in the ‘Awareness Warrior’ category. This is her story:

A Regular Day At Work Or Solid Messaging?

“Being in the police force, it’s our routine work,” replied DSP Sahu on whether her act was just another day of work or an act of messaging. Describing the situation then, she said, the video was taken just a few days after a lockdown was imposed in Dantewada, as COVID was spreading fast. As in charge of the traffic department, it was her responsibility that people followed the COVID protocols. But since she was five months pregnant then, another message reached people that, “if in this condition, I’m here for your safety’s sake, then it’s your responsibility, too, to stay at home, ensure your security,” the police officer told Onlymyhealth. 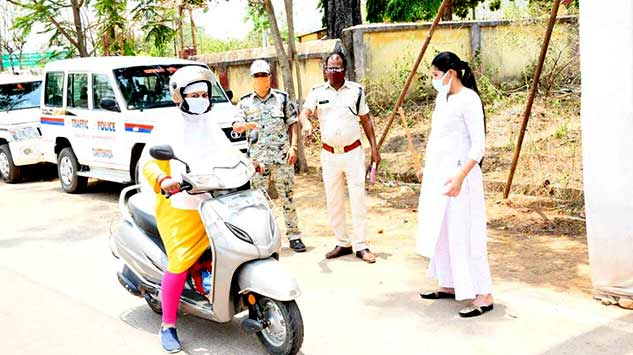 ‘Had No Fear’: DSP Shilpa Sahu

“I had no fear for myself,” DSP Sahu said if she had any fear for herself or her child while on duty, braving the summer heat while being heavily pregnant as COVID spread rapidly. However, “I worried for my child that he/she doesn’t get harmed because of me,” she said. On her family’s reaction, the DSP said they were worried and felt she shouldn’t be on duty in such a condition.

“However, we took all the COVID-appropriate measures,” the DSP said, measures that include wearing a mask, taking care of hand hygiene, and practicing social distancing. Following this induced confidence in her, she said.

Also, she was staying alone in Dantewada at that time. Her husband, also a DSP, was posted in another area, which is situated 40 km away from her area of posting, while her family lived in another city. Hence, she had to handle the situation with confidence, DSP Sahu said. 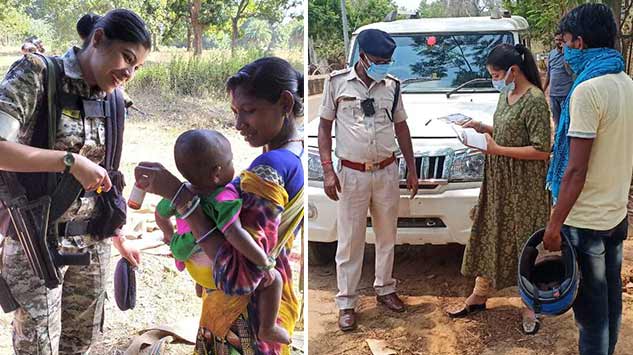 Standing out in the sun braving India’s summers while being pregnant, at the same time, protecting oneself from COVID, are no easy task. But, they were made to appear easy by Dantewada’s DSP, who said, she faced no major health issues while on duty. For preventing dehydration, she drank water frequently. However, she faced some issues, such as weakness, which is a part of pregnancy, as well as swollen feet, due to standing for long hours. “I used to massage my feet in the night to prepare for next day’s duty,” the DSP said with a mild chuckle.

Whether working outside or not, the responsibility of childcare disproportionately falls on a woman’s shoulders in India. DSP Shilpa Sahu, who gave birth to a baby boy last September, said, “it will be a challenge.” Once she resumes her duty, the DSP plans to carry her infant with her to work as much as possible. She has her family for support, but she also plans to utilise technology as much as possible to take care of her child.

On creche facilities, the DSP said since Dantewada is a Naxal-sensitive area, not many women are posted there, hence the place lacks such facilities. But once she resumes work, she plans to make changes and said they have thought of assigning a room for such services, so that women can take care of their children while fulfilling their job responsibilities. 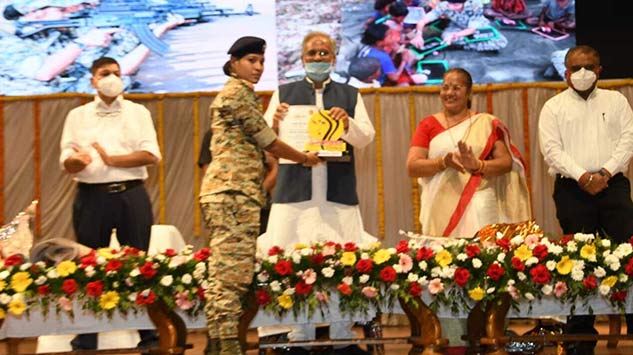 What brought DSP Shilpa Sahu to Dantewada was her husband who’s also posted as a DSP in a different sub-division, 40 km away from her area of posting. Having met while training to be police officers, they asked for the same area of posting once they got married. Since Sahu’s husband, DSP Dewansh Singh Rathour, was already posted there, hence, she too got posted in Dantewada, a place notorious for being a Naxal stronghold. “Other than the headquarter, other regions are so sensitive that one can ply without security,” she said.

However, any amount of threat couldn’t deter Shilpa from fulfilling her responsibilities as a police officer. As in-charge of ‘Danteshwari Fighters’, the first all-women anti-Naxal unit, she heads her team for Naxal operations. Many surrendered Naxalites who help them in understanding how the militants attack. Many local women are also a part of ‘Danteshwari Fighters’.

Sensitising people on COVID in such a way while being five-months pregnant is no ordinary act. And for her act of strength and bravery, Onlymyhealth gives a big shoutout to DSP Shilpa Sahu. If you too want her act to be recognised, then don’t miss out on this opportunity and vote for her.