Breastfeeding alone cannot suffice all the nutritional requirements of a child beyond six months of age. Complementary feeding is equally necessary.

Dear parent, do you know what is complementary feeding? Sadly, the most common answer to this question would be a NO. While everyone is aware of breastfeeding and the importance of mother’s milk to an infant, very few parents know the need for complementary feeding let alone the right nutrition for the child. This world breastfeeding week, we decided to raise this topic to spread awareness amongst parents regarding the necessity of complementary feeding for children and how to do it rightly. Onlymyhealth spoke to Dr. Ketan Bharadva, Chairperson- Infant Young Child Feeding (IYCF) Chapter of the Indian Academy of Paediatrics (IAP). Scroll down to read his insights and follow them to give a healthy future to your child.

What is complementary feeding?

This is a term that signifies food that complements breastfeeding to provide optimal nutrition to a growing child. After 180 days or after 6 months, the child should be introduced to solid foods slowly and steadily. Starting from feeding pureed and soft mashed nutritious foods and then gradually giving granular foods until the child becomes able to eat solid foods and that too by himself/herself. Breastmilk should be fed until the child is comfortable weaning off gradially after 2 years age but that cannot suffice the growing nutritional requirements of the child. The transition from drinking breast milk to eating solid foods is called complementary feeding. Another reason why nutrition plays an important role is because the initial years of life are very crucial for a child’s development. As per Dr. Bharadva, 80% of the child’s brain develops in the first two to three years and nutrition is extremely important to promote physical and cognitive growth. We see many children malnourished or with poor cognitive abilities and the main reason behind their slow development is poor nutrition. They were not given the right foods at the right time that obstructed their growth.

Even children who are not being breastfed or are on some kind of formula milk must also be introduced to complementary feeding.

Also Read: 5 Breastfeeding Positions That Every New Mother Must Know

Guidelines for foods to be given under complementary feeding

It is not that you can give anything to your child just to make them practice eating. You need to keep several things in mind while feeding your baby.

Consistency of Food: This is of utmost importance as the consistency of food changes with time. Initially, when the child is 6-8 months, you feed him mashed soft or pureed porridge foods. Do not give fluids or liquid foods to the child during complementary feeding period as they cannot meet calorie needs. After 8 months, you can give granular lumpy foods to the child that he can chew between the gums. Slowly, introduce soft finger foods that can be easily picked up by the child and he can independently eat them.

Calories: The foods given to the child should be calorie-dense foods since their stomach is small that would promote their growth. Here is a list of foods that should not be given to a child during complementary feeding: 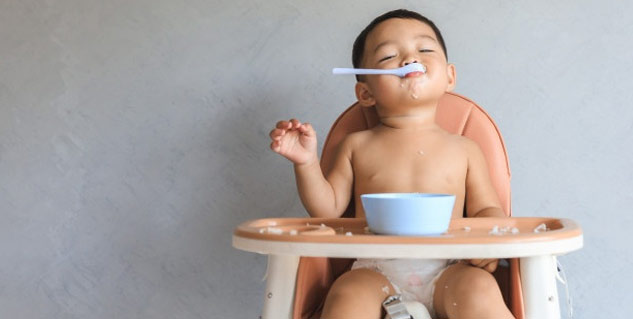 How is complementary feeding done?

‘One Food At A Time’ is the basic principle of complementary feeding. This makes the process a lot simpler for parents especially first-time parents. According to Dr. Bharadva, you must give one food at a time to the baby. Do not get excited and go crazy by introducing different foods to your baby. Slow down and give only one food for multiple days. Every fourth day, add a new food to your child replacing the older food(s) gradually. This way, the new food would eventually take a larger part of the meal of the child and you would be able to introduce new but nutritious foods to them.

Another thing to note is that gradually increase the amount of feeding. For example, you give one spoon of food the first day and two spoons feeding the second or third day. This gradual increase would make it easy for the child to develop the change and digest food properly. By 6-8 months, the child can be given two meals a day and later upto 10 months, he can be given 3 meals a day and then 3 meals and 2 snacks per day. Over time, the diet of the child would increase and so would his exploration interest for foods. NOTE: Please note that feeding only fluids and pureed foods won’t help your child. Instead, it would make it difficult for them to accept and eat granular foods like dal chawal. They might become picky eaters as they have not been accustomed to the taste and texture of food. Do not try to make foods pasty by grinding them but make the child eat granular foods to be able to understand the textures by 9 to 10 months age..

Do not give packaged or ready-made foods during complementary feeding

Remember those packaged porridges and baby cereals that parents generally feed their babies? They are very unhealthy for the child. These are not recommended by experts. Breastmilk substitutes and complementary feeding substitutes, feeding bottles and teats are banned by the government under the Infant Milk Sibstitutes Act 1992. Such products are banned to be advertised or promoted as they are not nutritious.

One should give only homemade, fresh foods to the infants and introduce food varieties with colour, texture, fragrance and taste. This prevents them being picky eaters. Many parents complain that their children do not eat vegetables, fruits and other healthy foods. Some say that the child eats only sweet food. This is all because they have not been exposed to food varieties during complementary feeding period and so, they are not ready to accept any new taste now.

World ORS Day 2021: Know All About Giving ORS To Children