What is Chronic Obstructive Pulmonary Disease (COPD)? Constructive Pulmonary Disease is a disease that involves the tubes and the tissues of the lung, also known as the airways of the lung and the parenchyma of the lung. COPD occurs when the lung is damaged or irritated by a noxious or a harmful substance. These toxic substances can range from cigarette smoke to biomass fuels which are used in rural areas for cooking to air pollution in the atmosphere. We also know that diseases such are tuberculosis once treated can result in a chronic condition which resembles smoking-associated COPD. The diagnosis of COPD presently is made using a test called the spirometry. Spirometry is a test in which you blow into a tube, and the machine measures the lung function that an individual has, and there are specific parameters which point towards the diagnosis of COPD.

What are the signs and symptoms of COPD (Chronic Obstructive Pulmonary Disease)?

The most common symptoms to look out for are:

So if an individual has any symptoms, they should get a spirometry test done to rule out the possibilities of COPD. Faulty diet and lifestyle play a significant role in any disease like:

What is the prognosis of COPD (Chronic Obstructive Pulmonary Disease)?

Dr Lancelot Mark Pinto, Consultant Respirologist, P.D Hinduja Hospital & MRC says that "COPD, by definition, tends to be a progressive disease which is as the person gets older, the disease tends to worsen in terms of severity. Do things influence this prognosis? Yes. If an individual stops smoking the velocity at which the disease progresses slows down significantly. If the noxious stimuli, which are irritating the lung such as biomass fuel or pollution reduce that exposure to the lung reduces and one can alter the prognosis of the disease." How does one can prevent Chronic Obstructive Pulmonary Disease (COPD)? 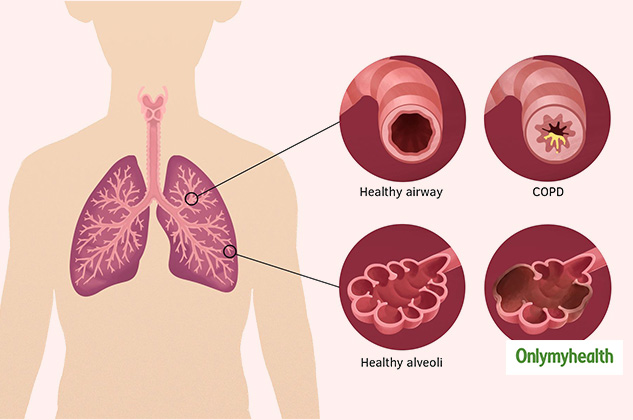 What is the diagnosis of Chronic Obstructive Pulmonary Disease (COPD)?

"Unfortunately, COPD often diagnosed in stage 2 or stage 3, that is the most advance form of the disease. This is because the lungs are very resilient organs and a person can go about his or her day to day activities without realizing that they have COPD till their lung function falls to almost 50% that what it should be which is why the way to detect COPD at an early stage is to screen yourself. If you have smoked in your lifetime at any point of time or been exposed to biomass fuels, you should get screened with spirometry or a PFT to know whether you have COPD. Of course, if you have symptoms, you must get tested for COPD" said Consultant Respirologist, Dr Lancelot Mark Pinto. What is the expected duration of Chronic Obstructive Pulmonary Disease (COPD)?

Life Expectancy depends on the severity of the disease. If proper treatment is taken and advice from an Ayurveda Vaidya is followed, the patient can survive for a longer time. However, the average life expectancy who undergoes a lung transplant (of a COPD patient) is about five years. People who continue to smoke (even after COPD), develop severe hypoxemia, right-sided heart failure and have low ability to do daily functions usually have a poor prognosis. They also have a rapid decline in the FEV1/FVC ratio. "Yes. Yoga practices increase the lung capacity and strength of internal organs. Patients of COPD also suffer from anxiety and depression, so Yoga plays a vital role in strengthening them physically as well as mentally. Many studies have been conducted on Yoga regarding its role on COPD patients which indicated that Yoga not only works at the physical level, it plays a role in psycho-emotional stability and relaxation" said, Dr Pooja Kohli.