What Is Postpartum Psychosis? How It Effects Women's Health

Postpartum psychosis and depression in women can be quite common after the first delivery of the baby, here are some effects that it has on health.

Giving birth to a child bring along many changes in a women’s body and thus it leads up to emotional tensions as well. Motherhood is considered as one of the most beautiful phases of women’s life. But sometimes the ups and downs that come along with it actually have an impact on the mental health of the person. There are many factors that play a role in postpartum mental health conditions. During the phase of postpartum birth, all the mental health issues fall under the category of postpartum psychosis. Let us know about symptoms and effects it can have on health of a woman.

What is Postpartum Psychosis?

Dr. Tanu Chowdhury, Clinical Psychologist from Healthcare Clinic, Lucknow talked about conditions that affect postpartum psychosis in people. She told that if there is extreme mental illness which comes as a response of giving birth to a new born baby, then it is categorized as postpartum psychosis. Postpartum psychosis could prove to be very traumatic to the woman post birth of the child. In some cases, women have also got bipolar disorder, which is actually a part of depressive disorder. The most devastating effect of postpartum psychosis is when it harms the child, physically or mentally. This is not so common and happens to few women only. If we talk about numbers then only 2 in some 1000 women experience postpartum psychosis. This conditions usually occurs within some 2-3 days after delivery of the child.

There are different types of postpartum psychiatric illness that could affect your health, here are various types of psychotic conditions that could possibly happen.

This is the most common type of postpartum mental health disorder which is most common in terms of occurrence. Symptoms of depression and women can last for two to three weeks, depending on the condition of women. There are different symptoms that could be associated with postpartum depression. Here are some of them that you need to be aware of- 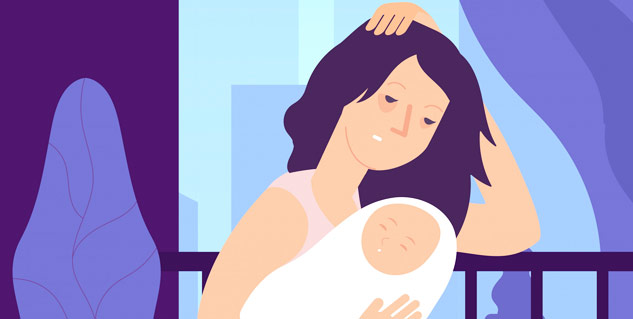 Most of the doctors consider postpartum psychosis to be a part of severe mental health effects. It is quite common for most of the new mothers to have episodes of sadness, fear and anxiety. This could be due to various reasons and mental health pressures that occur with the occurrence of her new baby child. When these symptoms are prominent, then they could potentially turn their generous for the health. Therefore, it is important that you seek help from an expert.

Psychosis refers to conditions when a person loses touch with reality. In the condition of psychosis, people may start hearing, seeing and believing things that are not true. Postpartum psychosis could be very critical condition for new mothers, especially for her baby.

MORE FOR YOU
6 Secret Side Effects Of Missing Breakfast
Toddler Food Allergy: How To Know Your Toddler Is Allergic To Certain Foods
5 Signs That Indicate Your Partner is Emotionally Cheating On You
5 Nutrients That Are Important For Your Mental Well-Being
Emergency Treatment For High Blood Pressure At Home
7 Worst Foods for Children’s Teeth That You Must Not Let Them Have Regularly

Every Pregnant Woman Should Know About These 9 Common Pregnancy Problems