Irrfan Khan Dies At The Age Of 53: He was admitted to the ICU and after that Irfan Khan's health deteriorated, where he died.

Irrfan khan death latest news: Irrfan Khan, one of Bollywood's veteran actors and received the National Award for the film 'Paan Singh Tomar', died at the age of 54 years. He was admitted to the ICU of Kokilaben Hospital after his health deteriorated. According to reports, Irrfan was hospitalized for about a week due to colon infection (the type of digestive disease). According to a statement by his publicist, "Irrfan was a strong soul, someone who fought till the very end and always inspired everyone who came close to him."

My dear friend Irfaan. You fought and fought and fought. I will always be proud of you.. we shall meet again.. condolences to Sutapa and Babil.. you too fought, Sutapa you gave everything possible in this fight. Peace and Om shanti. Irfaan Khan salute.

Irrfan was accompanied by his wife Sutapa Sikander and both sons Babil and Ayan. Irrfan's mother Saeeda Begum died on Saturday, and he last saw his mother through a video call.

Shocked to hear of the demise of Irrfan Khan, one of the most exceptional actors of our time. May his work always be remembered and his soul rest in peace

Irrfan was suffering from a tumour

Significantly, in March 2018, Irrfan tweeted and shared information related to this tumour. He revealed his illness and told that he has a disease called neuroendocrine tumour, but the love and strength of the people around him have raised a new hope in him. 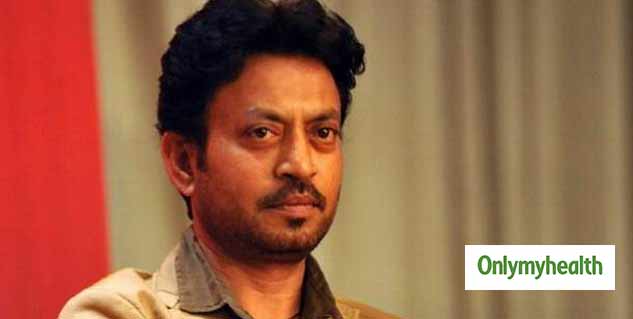 Irrfan returned to India from London in September 2019 last year after battling the disease for a long time. Irrfan was seen sitting in a wheelchair at the airport. However, after returning to India, Irrfan completed the shooting of the film 'English Medium'. This was his first film after recovering from illness, but the film was not able to show any extraordinary feat at the box-office.

Also Read: Men and Children May Also Suffer From UTI

Shocked and saddened to hear about the untimely demise of #IrrfanKhan. We have lost a highly talented, an acclaimed actor and a fine human being.
May his soul rest in eternal peace.
My deepest condolences to his family.

Irrfan Khan was born in a Muslim family in Jaipur. Irrfan was a post-graduate (M.A). When he was studying, he received a scholarship to study at the National School of Drama.

T 3516 - .. just getting news of the passing of Irfaan Khan .. this is a most disturbing and sad news .. ��
An incredible talent .. a gracious colleague .. a prolific contributor to the World of Cinema .. left us too soon .. creating a huge vacuum ..
Prayers and duas ��

His career started with television serials. In his early days, he appeared in series like Chanakya, Bharat Ek Khoj, Chandrakanta. His film career started with a small role from the film 'Salaam Bombay!', after which he did several films. Irrfan got his real identity with films and roles like 'Maqbool', 'Rog', 'Life in a Metro', 'Slumdog Millionaire', 'Paan Singh Tomar', 'The Lunchbox' etc. What is a colon infection?

Viruses and bacteria can cause colon infection. Most food-borne diseases or food poisoning are the main reasons behind colon infection. Common bacterial causes of foodborne infections include Shigella, E. coli, Salmonella, and Campylobacter. These infections can cause bloody diarrhoea, and as a result, any person may suffer from dehydration.

Your Body Can Detect Sugar Even If You Don’t Taste, This Research Explains