The social media campaign that took flight in support of 'Modi Sarkar' with the suffix, 'Ab Ki Baar Modi Sarkar' did create ripples across the nation. Here is what effect it has on the public psyche. 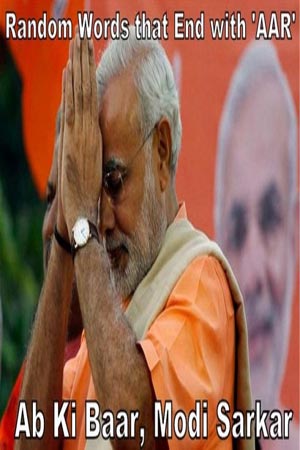 The 2014 Indian general elections was the longest in Indian history, the largest democracy in the world with the largest electoral population lined up outside poll booths across the nation to elect a Government. The campaigns were on full throttle with social media advertisement, to public appearances of candidates, but amidst all there was something standing out. There was one particular idea that swept the nation away, it was dearly called, NAMO. It is now only a matter of time to see what impact it really had on the citizens of the nation.

If you have been hobnobbing in the social network circles then you probably have read slogans that ended with the suffix, “Ab ki Baar Modi Sarkar”; yes, it was pretty much the war cry of internet users who believes in the power of the saffron brigade. To add to this we also had advertisements of Mr. Narendra Modi, the Prime Ministerial candidate for BJP (Bharatiya Janata Party) across all mass media. The man was literally in front of our faces, starting from the morning newspaper to the radio while we drove to work, to the last bit of evening news that we watched before hitting the bed.

What effect does it have on the mentality of common citizens? People who do not have any political inclination? Those who wonder whom to vote for? How does such a rigorous campaign affect the psyche of the public?

Now imagine you are getting bombed with pictures of a product, and everyone around you seems to be endorsing it. The fact is that out of ten may be only 5 people have endorsed it, but they are exhibiting it in such a manner that it seems like the world is going crazy about this product. The “Ab Ki Baar Modi Sarkar” suffix didn’t leave us at all! It was ever where!  It was too much for any normal man to handle, and it didn’t stop there, people started putting up their statuses about it too. Well, it does affect the psyche. It sure does develop the curiosity of the public.

Once the Brand Modi/NaMo gets established it seeps into the public life. There are restaurants named after him, there are comics that depict his childhood, there are t-shirts, and tattoos, and what not. It creates a sort of frenzy for a product, in this case a man whom India is bound to elect. This would make one take notice, and will make one realise that here is someone who is so much on demand, why so?

Now social media is such a platform which is more or less free. You do not really need to do much to advertise here, just post a picture, and write a status, post a link or a video and you are good to go. The Brand Modi was reinforced through social media by these. The best part is, you can post n number of times, and it won’t matter. The brand Modi was designed by the man himself, as he went out campaigning and gaining confidence in people. Then in this final stage it was sent out to the public in a modern form through social media, that which appeals to them. This struck a good chord and people liked it.

A survey that was conducted earlier in 2014 said that social media could influence the outcome of 160 out of 543 Lok Sabha constituencies. The staggering fact is that four out of five state elections have been won by BJP, coincidence?

It is safe to say that Narendra Modi has done well in what is touted as, the first social media election in India. “16th May ko hoga taiyaar, abki baar Modi Sarkar?”