Rana Daggubati has been one of the most loved villains of all time. On his birthday, let’s take a look at what the actor does to stay fit and healthy

Born on December 14, 1984, South Indian actor Rana Daggubati turns 35 on December 14. Primarily known for his work in the blockbuster film, Baahubali 2, where he is seen flaunting a ripped body. Rana has also been a producer, visual effects coordinator and a photographer in both Telugu cinema and Bollywood movies. He is currently shooting for his upcoming film Bhuj; The pride of India, which is scheduled to release on March 14, 2020. Ever since he joined the industry in 2005, he has always been a focused campaigner and accepted every challenge he faced as an actor. Whether be it gaining 25 kilos of weight while preparing for the sequence of Baahubali or losing weight for the biopic of Chandra Babu Naidu, the actor has always been up for challenges, Rana has now become a role model for many young fitness freaks. 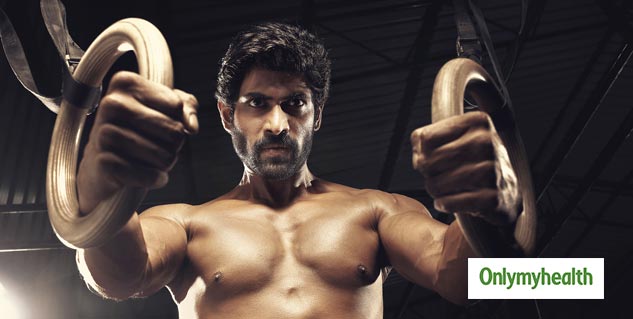 On his birthday, we would like to share with you his day to day diet and fitness regime he follows to stay flawless at whatever he does:

While he generally goes to the gym two times a day, Rana usually keeps at least half an hour in the morning and about a full hour in the evening. His morning routine starts with cardio exercises for about 15 minutes, which is followed by strength maintaining exercises. He ends his workout with push-ups and weight lifting. His evening routine starts again with cardio. His exercises are focused on building the chest and triceps as he is mentally focused on working hard to maintain a balance between both the sides of his body.

If I could do it you can too!! #mondaymotivation @kunalgir

As Rana Daggubati has to adapt to different roles and maintain his body, he follows a rigorous diet plan, which includes 5 meals a day. He loves to eat non-vegetarian food and steers clear of smoking and drinking. Here’s what he usually eats:

Good start to the day :)

Work out and fitness tips by Rana Daggubati, as told to Workout Info Guru: