Anaemia During Pregnancy: Know Symptoms, Treatment And Preventive Measures By This Gynecologist

Anaemia in pregnancy: Recurrent pregnancies and low birth spacing in reproductive age women lack awareness about the factors causing anaemia. But do you know those possible strategies to prevent the risk factors of anaemia play a significant role? The efforts should be aimed toward the early diagnosis and treatment of anaemia well before the time of full-term delivery. Some of the measures have been proposed to prevent anaemia such as health awareness campaigns, screening programs for anaemia, cooking food in iron utensils, frequent visits by Anganwadi workers to pregnant women, iron-folic acid supplements and fortification of food with iodized salt. Is anaemia common in pregnant women? The World Hea has estimated that the prevalence of anaemia in pregnant women is 14% in developed and 51% in developing countries. It is painful to mention that India can range from 20 to 80% in various populations and contributes to about 80% of the maternal deaths due to anaemia in South Asia.

To enhance our research on this topic, OnlyMyHealth editorial team contacted Dr Jaideep Malhotra (Director, Rainbow IVF), who answered some the most searched questions related to anaemia during pregnancy.

Are there any risk factors involved in becoming anaemic during pregnancy?

Anaemia is considered as a significant cause of maternal and fetal morbidity and mortality in developing countries. It may lead to low birth weight, premature birth, fetal death and fetal cognitive impairment. Maternal complication includes preeclampsia, antepartum haemorrhage, puerperal sepsis, and thromboembolic complications leading to subinvolution of the uterus, failure of lactation, postpartum depression, delayed wound healing and babies born to such mothers can have anaemia and developmental delays. Folate and B12 deficiency can also cause severe congenital disabilities like neural tube defects in babies. Is anaemia during pregnancy preventable?

Anaemia is preventable if we can educate our population about the importance of good nutrition right from in utero through our life. It all begins in the womb, and if the mother is malnourished, then the whole future generation will struggle, interventions in adolescents, preconception, pregnancy and immediate postpartum can have longterm positive effects on the health of women and children. Poshan Abhiyan, school nutrition programmes and many such initiatives need more awareness and more comprehensive and effective implementation. Despite these efforts, the prevalence of anaemia is 65–75% in India.

Types of anaemia during pregnancy 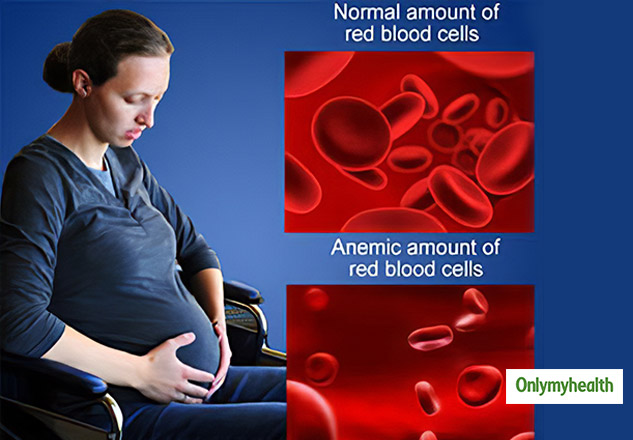 Iron deficiency, Folate and B12 deficiency anaemias are the most common anaemias prevalent amongst pregnant women .there are many contributory factors and foremost being a residence, educational status, monthly family income, occupation, gestational age, dietary habits of not eating green leafy vegetables, iron-folic acid supplementation, animal and meat products and drinking coffee and tea immediately after meals.

Symptoms and treatment of anaemia during pregnancy