All You Need To Know About Keratosis Pilaris From Renowned Dermatologist

Keratosis Pilaris is a skin condition that cannot be cured by prevented from worsening. Know all about this condition in this article.

The dry, rough patches and bumps on the skin could be due to Keratosis Pilaris. This condition is caused when the dead skin cells clog hair follicles and are often red or brown in color. It is not at all contagious, and commonly affects the upper arms, thighs, or cheeks. Keratosis pilaris can also show up on the face, but that is very rare. It is highly common in children and teens but it usually subsides as they get older. The condition mostly disappears by the age of 30 years. According to Dr. Nivedita Dadu, Dermatologist, Founder and Chairman of Dadu Skin Clinic, there is no cure available for keratosis Pilaris as of now but we can try to prevent it. One can use moisturizers and creams prescribed by the dermatologist to minimize its symptoms on the skin.

The main cause of Keratosis pilaris is the buildup of keratin. This is a protein whose role is to protect the skin from skin infections, viruses, bacteria and other harmful substances. The keratin forms a scaly plug that blocks the opening of the hair follicle on the skin surface. These plugs cause patches of rough and bumpy skin. The keratin present in our body hair gets clogged in the pores that block the opening of growing hair follicles; this causes the formation of Keratosis pilaris. The exact reason for Keratosis Pilaris is unknown to the dermatologists but it si believed that this condition is associated with genetic diseases and other skin conditions like eyelid dermatitis and atopic dermatitis. 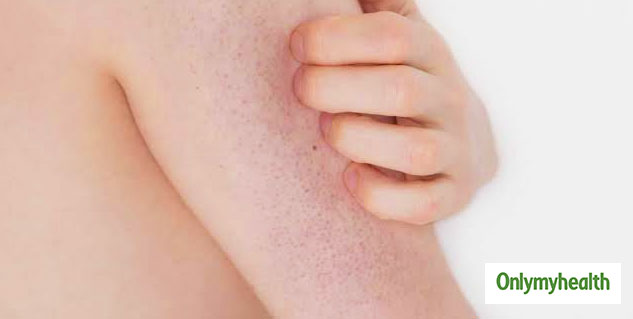 What are the symptoms of keratosis pilaris?

The most common symptom of keratosis pilaris are:

It is more noticeable and worse during the seasonal changes as due to low humidity skin becomes drier.

Also Read: Dermatologist Explains What Causes Chest Acne and How You Can Treat It At Home

How can keratosis pilaris be treated?

As mentioned earlier, there’s no known cure or treatment available for keratosis pilaris. It clears up on its own with age. But it can be prevented or reduced using a moisturizing treatment to soothe itchy, dry skin and improve the appearance of keratosis rash. These methods can also be considered for seborrheic eczema condition. Moisturizing lotions or creams shall be used only after consulting a dermatologist to avoid any unwanted side-effects. The two most common ingredients that one must look for in a moisturizing cream are urea and lactic acid. They help to loosen and remove dead skin cells from the skin and soften dry skin cells. Other treatments that can be applied to treat Keratosis Pilaris on the recommendation of the dermatologists are Microdermabrasion, Chemical peels, and Retinol creams. Topical exfoliants can also be used to remove dead skin cells from the surface of the skin. For this one can apply creams that contain alpha-hydroxy acid, lactic acid, salicylic acid, or urea. To aid inflammation and severe redness, laser treatment can also be used.

Also Read: Neem Oil Is A Proven Remedy For Many Skin Problems Some tips to prevent Keratosis pilaris

If you see the symptoms of keratosis pilaris, take these preventive measures to prevent worsening of the skin condition. If you do not find relief, visit a dermatologist to receive medical aid.