Why are women so scared of spiders? (and other creepy crawlies)

No matter how small spiders are, women will always be scared of them. Here is the psychology behind this innate fear of creepy crawlies.

Men may fear many things but spiders and other small insects are not among them. On the other hand, most women easily get scared of spiders. Men often make fun of women for having such fears, especially of small pests and insects. It's time men realise the fact that when a woman gets scared of spiders, it's not about she being less brave. It's just that she is programmed to be scared of spiders. 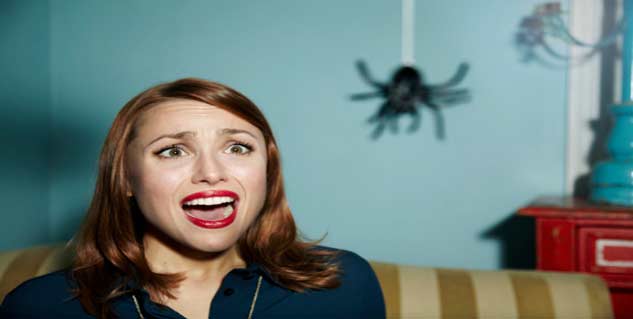 A recent research from Carnegie Mellon University, Pittsburgh, suggests that women are bound to easily get scared of crawling insects as compared with men. The study included 10 young girls,10 young boys and several pictures of spiders.

All the participants were shown a colour image of spider next to a fearful cartoon face. The researchers then showed them a spider next to a happy face and a flower alongside a scared face.

The girls looked at the happy face image for significantly longer than the scared one which indicates that they were able to associate spiders with fear but the happy image was strange to them and they were distrustful of it. On the other hand, the boys looked at both sets of images for exactly the same length of time, indicating that boys have not yet learned to associate spiders with fear.

According to researchers, this behaviour of women is because they are evolved in such fashion that t/hey can sense venomous insects and harmful animals.