All You Need To Know About Staph Skin Infection, Symptoms And Treatment

Here is everything you need to know about staph infection from what it is, its symptoms and treatment options available.

In many cases we tend to ignore some diseases and especially skin infections but only learn how much harm they can cause once they become fatal. Staph infection is one such bacterial skin infection which can range from a simple boil to a life threatening infection. Read along to know more about staph infection, its symptoms and treatment options available to cure this disease with Lt Gen (Dr) Umesh K Sharma, AVSM, MD, DM (Nephrology) Erstwhile Commandant and Director, Army Hospital (Referral and Research), New Delhi. Presently, Head of Department, Nephrology and Renal Transplantation, Ramesh Group of Hospitals, Guntur, Andhra Pradesh.

What is Staph Infection?

Caused by staphylococcus bacteria found on the skin or inside the nose of an individual is termed as the staph infection. Although in most of the cases this bacteria is not very harmful and is considered to be a minor skin infection but can turn into a deadly disease if it gets deeper into the body. If this bacteria gets into a person's joint, bloodstream lungs, muscles or heart it can possibly turn into a life threatening staph infection. This infection generally looks like a yellow crusting on the skin and can begin with a little cut. It can range from a simple boil to a flesh eating infection. Here’s what Dr Sharma has to say about this disease, “Staphylococci reside in the skin. Which is why so many infections start with a boil. Staph aureus is a deadly pathogen. The species gets its name from the golden coloured colonies it forms in culture media. Methicillin-resistant Staph aureus (MRSA) is usually a hospital-acquired infection that is more virulent and more difficult to treat.”

What are the Symptoms of Staph Infection?

It is better to look for early signs and symptoms of any disease and seek immediate treatment in order to avoid further complications. Here are some of the symptoms of staph infection that can be observed in a person are- 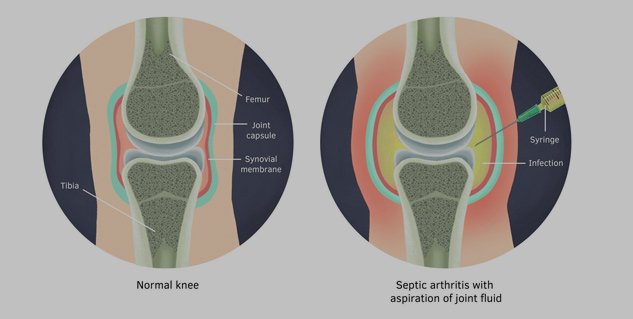 Septic Arthritis is caused when the bacteria targets the hips, toes, fingers or knees. The symptoms of septic arthritis caused due to staph infection are- Also Read: Having Prolonged Fever? Here Are Probable Causes & Symptoms For This Type Of Fever

Linked with surgery, tampons and skin wounds, toxic shock syndrome is a life threatening condition that is caused by toxins produced from the staph bacteria. The symptoms of this disease are-

The other early signs and symptoms of the staph infection are-

As by we know all about what staph infection is and its symptoms. Let us take a close look at the treatment options that are available for this disease.

MORE FOR YOU
Dealing With Digestive Issues? Do These 7 Yoga Asanas To Boost Digestion
Outbreak Of Measles In Mumbai: Children At Risk
Triple-Negative Breast Cancer: Causes, Symptoms, And Treatment
Crooked Teeth: How They Influence Your Oral Health
Flexibility 101: Why It Is Important & 5 Best Stretching Exercises
Lean Protein: Why We Need It & 5 Best Sources

Whipworm Infection: All You Need To Know About This Parasitic Infection