Holi is widely celebrated across India. Learn about the rituals of holi that hide behind all the pomp and show. 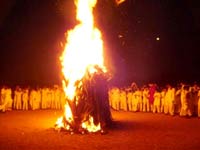 Holi is a popular festival that celebrates harvest, fertility of the land and religious beliefs. It is religiously followed every year with enthusiasm and gaiety. Here is how the popular festival of colours begins from morning and continues until late afternoon.

Several days before the festival, people mark their excitement for the festival by gathering wood for lighting a bonfire called Hollika at major crossroads of the village, town or city. Collecting wood over a period of several days ensures that there is a huge pile of wood on the day of the festival.

It is on the eve of holi that Holika Dahan is celebrated. Holika, in Hindu mythology, was the devil-minded sister of King Hiranyakashyap, who was given the task of having the king’s son, Prahlad, burnt down to ashes. The ritual symbolises victory over darkness or evil.

The day following Holika Dahan is the day when Holi is celebrated across India. The day is called Dhuleti. It is on Dhuleti that people get out of their home and play with colours. No tradition of puja is known to be practiced on the day of Holi, however, there may be people, who believe in organising one before setting out to play with the colours. The tradition of playing with colours is rampant in the Northern part of India though there can be no comparison to how Holi is celebrated in Mathura and Vrindavan where Lord Krishna was once housed. People in Maharashtra and Gujarat are also known to celebrate Holi with great enthusiasm.

Apart from throwing colours at each other, people take extreme delight in throwing coloured water on each other and, sometimes, even strangers. People celebrate holi by singing Bollywood numbers and dancing on the beats of Dholak, which is also a major part of the tradition.

The most interesting aspect of holi after the colours is the food. People relish mathri, gujiya, malpuas and other traditional delicacies with immense joy. Drinks such as thandai alongwith bhang are an intrinsic part of the festival. Bhang helps one to enhance the spirit of the festival though an excess of it can dampen the joy.

In the southern part of India, people celebrate Holi by worshipping the God of love, Kamadeva. South Indians spend an eventful day after which they meet friends and family and exchange gifts. Cultural programs are organised in social gatherings to celebrate the spirit of Holi.