Kundalini Yoga is practised in India as a form of physical, spiritual and mental discipline that helps in the development of strength, consciouness and character.

According to the practitioners of Kundalini Yoga in India, every human being has a serpent coiled at the base of spine, which acts as a source of enlightenment and energy. It is to harness and release the energy that Kundalini yoga is practiced. It is important for a beginner to first learn and understand the philosophy of Kundalini Yoga to prepare for its poses and mudras. 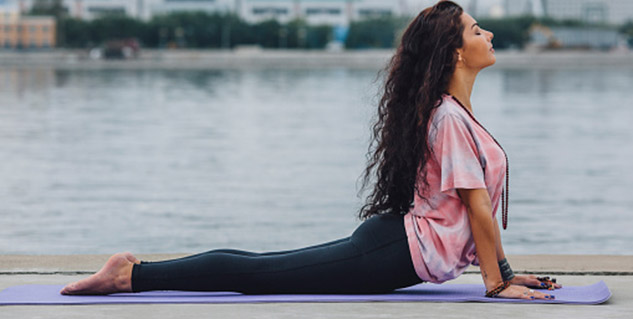 To do the crow pose, stand on a flat surface and bend your knees. Bring the hips as close to the ground as possible without touching it literally. Pull both the hands up and outstretch them parallel to the shoulder. Get back to the original position by slowly standing up and bringing the hands down.

To do the stretch pose, life the head and feet six inches from the ground. Take the arms upwards with the palms facing each other. Pull your neck and state at the toes for a while. Breathe as you stare at your toes.

To do the camel pose, place your hands on the small of your dorso for support and arch backwards with the help of your head. Your spine should form a perfect arch.

To do the Guru Pranam, bring your torso over the thighs and place your forehead on the ground. Extend your hands straight in front of you on the ground as if you are praying.