I Have A Mole On My Right Cheek, And These Are All The Myths I Have Heard From People

Here's the story of how having a beauty spot/mole on my face kept making me feel special and in demand, always! (on a lighter note)

The one thing that helped me stand out from the crowd was this mole on my right cheek. Yes, I have a prominent mole, or I would say a birthmark or a beauty spot, as my mother always put it, on my right cheek. There are vague memories of me asking my mother and father about what's sitting on my face, to which they always replied saying, "This is a beauty spot, which God gives to his most-loved humans. This will save you from evil eyes." However, things started to change when I was growing and got second glances every time I met someone new. Things are different when you are a school-going child. You make friends based on looks and appearances. You have innocent kids asking questions such that would put you in deep thinking. I remember changing many schools (as I come from a defence background) and with every school, I had to make different versions of how and why do I have a mole on my face. Despite coming from an educated and a modern family with a doctor, I had these baseless thoughts coming to my mind about this mole on my face. Only when I grew up, I could laugh at whatever I was told about moles and birthmarks by people.

This could be a story of every person with a prominent mole on their face. Some term it to be a beauty spot while some have their theories of connecting it to various concerning health problems. Some glaring myths and misconceptions that I came across about moles are undoubtedly exciting and worth sharing:

My mole would grow more prominent with age The first and most petrifying thought was to see my mole grow with age. I can recall how my friends kept asking me about my mole and its size. I would even get to hear things like your mole will keep getting bigger. The reason behind this was how the mole was the size of an ant when I was a baby and did grow in size a little when I was in school. However, now I know what a misconception this was. Moles by birth mostly grow in size before the 20s. The moles, which are primarily birthmarks, are different from the ones that appear in later stages of life (after 30 years of age).

Also Read: All You Need To Know About Laser Mole Removal

I could get rid of the mole by scratching it I always loved this mole on the face as my mother told me all the good stories, but as kids, it is common for us to get influenced to what others said. Hence, I remember the time when I kept scratching my mole for hours and hours, wanting it to just come off my face. It so happened that once I scratched it so hard that it started to bleed heavily. The only thing back then I could do was innocently tell my father (who is also a doctor)  what I did for it to bleed. That is when my parents told me how removing a birthmark is a minor surgical procedure where the skin needs to be grafted from one part of the body on the cheek. Hence, it is my word to those parents who have kids with such beautiful marks and moles on their faces; tell them how beautiful they are and hear them out when needed. Right from castor oil to chuna to aloe vera, what kept coming my was free advice to use home remedies. These home remedies are proven to be good for moles that mostly appear in the later stages of life. Also, there are several other factors that one must consider before using any home remedy. Even though back then I couldn't laugh it off that easily, the reason being it was that time when the Internet was not available at our fingertips like we have now. It did cross my mind how I could try these to at least make it lighter in the shade, but gladly I could accept how it appeared to be one of the most striking features of my face and appearance. These home remedies are undoubtedly suitable for generic skincare, but for moles, those who wish to get rid of them should always consult a doctor for the same.

Also Read: Tips To Improve Supportive And Palliative Care For Adults With Cancer

A little something from the past life 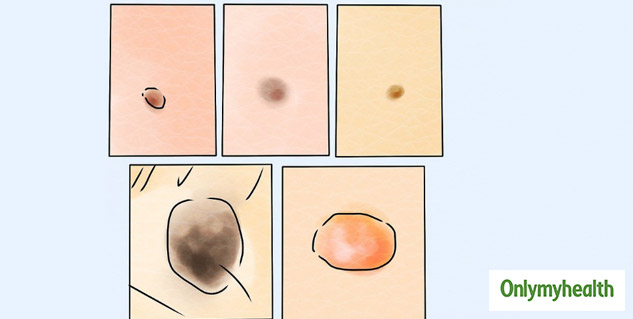 A common belief and something that I also came across, despite coming from places where I just had educated people around me. Some even said how birthmarks and moles from birth had a little connection from past life. Some also mentioned how the shape, size and colour of the birthmark denoted how the previous life would have been. Some said it could tell things like scars due to the stabbing, bullet marks, burns, etc. But, all thanks to the universe, I was sensible enough to shun these thoughts. Moles and birthmarks are extremely natural and normal for everyone to have. Some have it at places, which are hidden while some have it on their faces as I do.

Hence, some essential facts about  birthmarks that I would like to throw light on: