In a recent development, Finance Minister Nirmala Sitharaman declared a ban on the production and sale of e-cigarettes. Reasons cited behind this ban is its harmful effects on health

The use of e-cigarettes has always been in question because of its impact on health. In a press conference held on Wednesday, the Union Cabinet approved a ban on the e-cigarettes. This ban will be immediately imposed, and the production, import/export, manufacturing, sale, distribution and even advertising related to e-cigarettes will be banned with immediate effect. This decision of Union Cabinet is based on a paper issued by the ICMR on the potential danger of e-cigarettes. According to the draft, going against the ban can cost up to Rs 1 lakh or a year in jail. Continuous defaulters can also lead to imprisonment up to three years and a fine of up to Rs 5 lakhs. Even selling or keeping e-cigarettes can result in imprisonment of six months or fine of up to Rs 50,000 or both.

India has the second-highest number of tobacco users (268 million) worldwide - at least 1.2 million die of tobacco-related diseases every year. The harmful effects of tobacco have been known to all. However, there is still a considerable population, which heavily relies on tobacco consumption.

Earlier, an advisory was issued by the Union Health Ministry to all states and Union Territories against e-cigarettes, e-sheesha, e-nicotine flavoured hookah and devices that enable nicotine delivery. Also, the Indian Council of Medical Research (ICMR) had disregarded the use of e-cigarettes for the potential of causing addiction to nicotine. 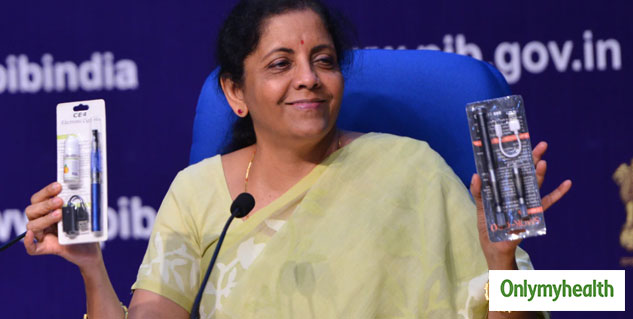 Earlier, e-cigarettes were promoted as a means to control the smoking of cigarettes. Also, the growing concern of smoking in teens made this is a viable option to reduce the dependency on conventional cigarettes. However, the Finance Minister stated that more than 400 brands were believed to be sold in e-cigarettes in over 150 flavours. Also, the alarming situation here was that none of those brands were from India."