Causes of Pelvic pain While Running during Pregnancy 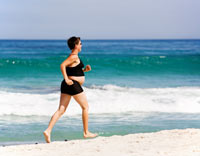 While you’re pregnant, running can be a little more troublesome than when you were not pregnant. When you run during pregnancy, you may feel pain in the pelvis area. It is due to the extra weight of the foetus you carry in the pelvis. Persistent feeling of pelvic discomfort during pregnancy may indicate infection inside the pelvis, pelvic bone pain or pain in non-reproductive internal organs in the pelvic area.

You must seek your doctor's assistance at the earliest if you experience pelvic discomfort while running during pregnancy. He will look for possible causes and then provide appropriate treatment. Take a look at these possible causes for your pelvic pain.

Extra Weight on the Pelvic

With every passing week of pregnancy, the size of the uterus expands and also, the weight of the foetus it carries increases, thus making you prone to pelvic discomfort when you run during pregnancy. The larger the foetus grows the more the pelvic discomfort and pressure on the bladder while running. By the third trimester of pregnancy, expectant mothers find it hard to walk for a few minutes, leave alone  running.

To balance the extra weight of the increased uterus, the pelvis tilts back and the ligaments stretch to accommodate the bigger size of the uterus. These changes may lead to severe pain in the pelvic area, even if you don’t run during pregnancy. It’s not only while running that you feel pelvic discomfort, it may continue for a few days even after you’ve stopped  running. Changes in the pelvic area start with the onset of third month of pregnancy, thus to avoid pelvis woes later in pregnancy, you can resort to low-impact exercises, such as jogging and swimming rather than running.

If you persistently experience contractions when your lower pelvic area tightens, you may feel pelvic pain and discomfort. If the contractions begin before  the 37th week of pregnancy, it’s a matter of concern, which should be reported to  your doctor at the earliest.  An expectant mother may prevent her condition from aggravating while running by staying hydrated before the run, especially during summer. Running causes excessive sweating, this may lead to dehydration, which in turn may result in preterm labour contractions. [Read: Is Running Safe during Pregnancy?]