UTI Diet: Foods You Should Avoid If You Have Urinary Tract Infection

If you thought UTI could only be treated with medicines, then you are mistaken. Your diet plays an equally important part when it comes to treating UTI

Due to the modern lifestyle, urinary tract infection (UTI) has become a common disease among women. The biggest and common cause is the use of unclean undergarments and dirty washrooms. Although this disease is not very dangerous, if not treated on time, it can affect the kidneys. The most common and prevalent cause of UTI, also known as urinary tract infection, among women is the use of western-style restrooms, where the risk of this infection increases manifolds. This problem is more common between the ages of 15 and 40.

As we thought that UTI could only be cured by taking medicines, one should also understand the need for eating right during the treatment. It is common to hear people saying that some food items increase UTI-related problems in several people. Can certain foods increase UTI problems? What are the things a UTI patient should avoid? How does your diet affect UTI symptoms? UTI is not caused by eating. It is not that any food causes UTI. But our food determines two things:

In UTI, either your immunity is low, or the pH of urine is impaired. However, UTI may be due to more reasons. Further, negligence in eating and drinking increases problems. If someone has UTI and is taking tea, coffee, alcohol in excess, it can cause inflammation in the bladder, leading to interstitial cystitis.

Also Read: Burning Urination? Is this Urinary Tract Infection? Know all about the infection

Below mentioned are some food items that one must avoid during UTI:

Say No To Tea or Coffee 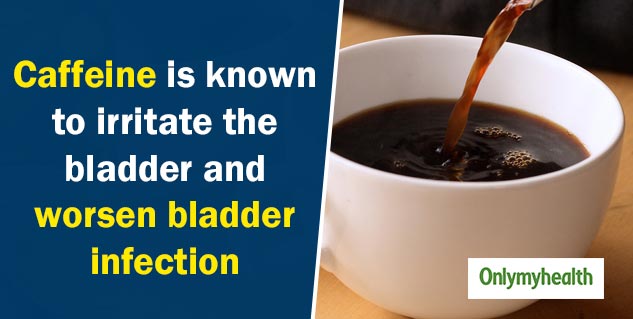 Yes, even if a cup of coffee or tea in the morning gives you freshness, but it can increase UTI symptoms. Therefore, it is advisable to reduce or altogether remove caffeine from the diet. So drink caffeine-free herbal tea until you get rid of UTI completely.

Some Fruits Can Also Cause Troubles

A healthy diet also includes fruits, but fruits that are high in acid, that is, eating citrus fruits can irritate the bladder and increase the problem of UTI. Avoid having lemon, orange, grapes and tomato if suffering from UTI. Apart from these, peach, plum, strawberry and pineapple can also cause problems.

You might know that liquor can cause bladder irritation, especially when you have a bladder infection. Also, alcohol causes dehydration (lack of water). One should altogether avoid alcohol if suffering from UTI as it may also reduce the effectiveness of medications.

Also Read: 6 Home Remedies To Get Rid Of Alcohol Addiction

Say No To Soda 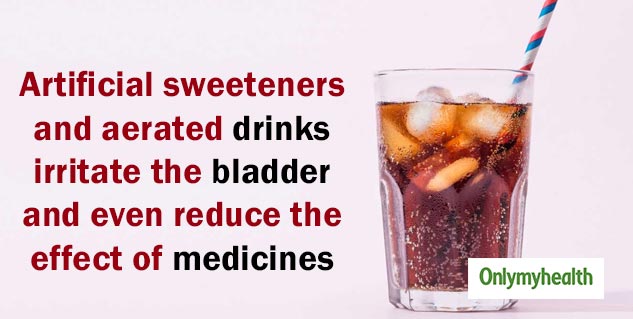 Soda can make symptoms of UTI infection worse. Carbonated drinks may cause sensory bladder irritation. Also, most of the aerated drinks are high in sugar content, which can further add to the woes. Many people believe that soda is alkaline, but it erupts in the body, so taking soda in any form is harmful. One should reduce intake of soda even if not suffering from soda as it is detrimental to health.

Any type of sugar, whether it is direct sugar or an artificial sweetener, both increase the bacterial activity, so both should be stopped. 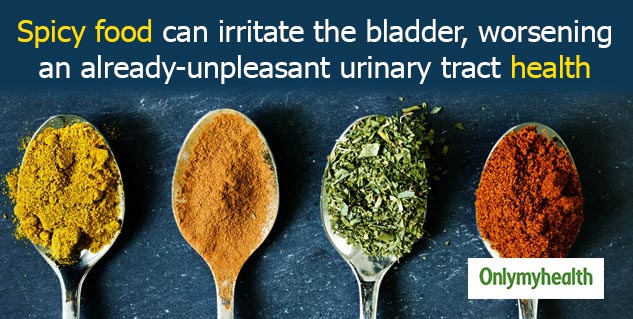 If you are suffering from UTI, do not take spices in any form. They irritate the bladder. Eat food, which is light on the stomach and even light on spices as spicy food can add to already unpleasant bathroom experiences.