What Pilates To Do If You Have Knee Pain? Know From Expert

Here are some easy Pilates exercises by Pilates expert Vesna Jacob with an elastic band to aid knee pain without triggering the injury.

If you think you cannot exercise with knee pain, you are wrong. There are several pilates exercises that help in alleviating knee pain while exercising the core muscles. Pilates doesn’t necessarily focus on the limbs. The way Pilates works is by strengthening the cord, the hips, the glutes and then it realigns and kind of trickles down the realigning to help the knees. There are quite a few exercises that help in strengthening the muscles and quadriceps to help with knee stability.

Why do knee problems occur?

The problem with the knee is that usually it is not exposed. It is a joint which is stuck between the two structures- the foot and the hip. Most of the knee-related problems occur because there is either an issue with the foot or the hip and the knee is stuck in between. The hip is connected to the spine and it is also a part of the pelvic region whereas the foot is connected to the ground. The knee is free in the middle. Therefore, the imbalances in the foot and/or in the hip triggers knee pain. Elastic Band Exercise While Lying Down

By using the band, you are the progressive resistance. This helps in giving stability to the legs so that you are strengthening the muscles while not putting a strain on the knee or creating any jerks. 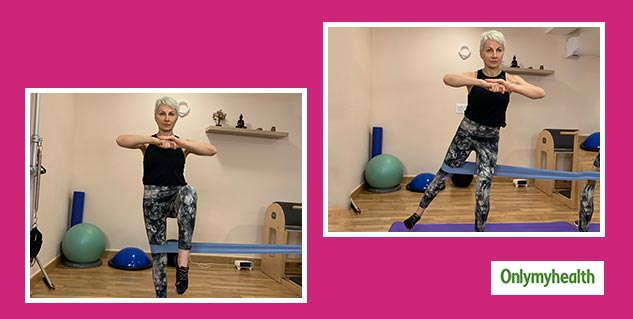 NOTE: You can also use dumbbells while doing this exercise once your knees get better. 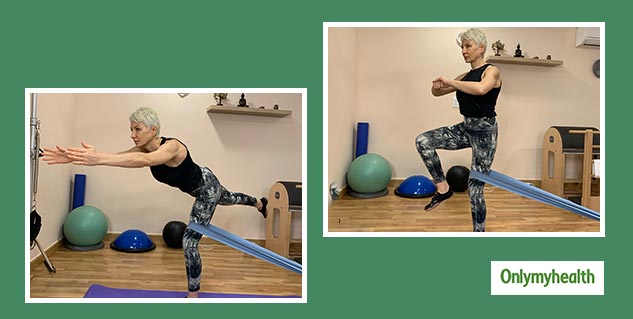 All of these exercises are helpful because the band is pulling and helping to stabilise the knee and working smaller muscle groups which in turn, strengthens the knee and helps with the pain. Once your knee pain is improved, you can practice the same exercises while placing the elastic band on the ankle.