Non Allergic Rhinitis is caused majorly above 20 years of age. Know the symptoms, causes and risk factors for this nasal condition.

We always talk about allergic reactions that prevail in our body but we do not consider non allergic reactions to be harmful to our health. Sneezing or congestion can sometimes be more than just cold or cough. It can involve non allergic problems that can become chronic over the period of time if not treated. One such disease is non-allergic rhinitis. This infection is of both types, allergic and non-allergic, but today we will talk about non-allergic type of it. Symptoms of non-allergic rhinitis are very similar to hay fever and some common cold symptoms. Let us look at this condition further in detail and know causes and conditions behind this condition.

We spoke to Dr. Rakesh Singhla, ENT Specialist at Vozart Healthcare Hospital, Kanpur to know about difference between types of rhinitis. He told that allergic rhinitis which is more common type of rhinitis spreads commonly as hay fever. This is a type of allergic reaction which is more prominent in people overseas. It is a seasonal infection and that occurs in spring and summers most of the time. 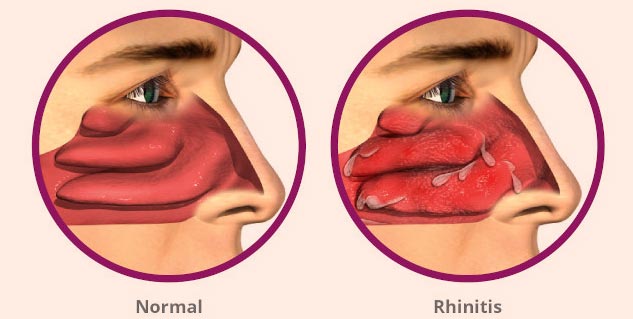 Non-allergic rhinitis is more common among teenagers and adults over the age of 20 years as they are sensitive to dust and allergies, etc. Triggers of non-allergic rhinitis can vary from every individual and affect the person in almost all weather conditions. This condition is more prominent indoors as it spreads through irritants, weather changes, medication, foods or any other chronic health condition.

In majority of conditions, people do not show any major symptoms of non allergic rhinitis, the symptoms are very common such as-

Non- allergic rhinitis occurs in the case where the blood vessels fill the lining of nasal passage in the nose. This happens because the blood vessels expand inside the nose; the cause of this is not known until now. However different studies suggest some possible reasons for non-allergic rhinitis. The most probable reason among them is that nerve ending becomes over responsive and expands to a limit that it causes congestion.

It results to swelling in nasal membranes and congestion inside the mucus of the person. Here are some triggers that you need to be aware of in case of non-allergic rhinitis-

This consists of factors such as dust, smoke, strong odours, and smell of strong perfumes that can trigger a person. It also consists of more harmful trigger factors such as chemical fumes raising from a factory for people those are exposed to that area. People working in these factories or nearby areas are more vulnerable to get this infection.

Weather also plays a major role in rhinitis; the non allergic ones can get affected in any changing weather. This can happen over time and chemical fumes can make it worse. In the changing weather there are higher chances of nose swelling and running nose. It triggers membrane present inside the nose and makes it swell.

It might sound strange but non-allergic rhinitis can also be triggered by certain foods. Some people get this condition when they eat too spicy or hot foods. Also drinking beverages that have alcohol in it can also cause membranes to swell and result in nasal congestion as well as problems.

Changes that are associated with pregnancy or menstruation, especially in females can lead the person to non-allergic rhinitis as well. This happens because the given conditions cause imbalance in certain hormones which make you vulnerable to rhinitis.

6. Acid Reflux or sleeping on your back

Lying on your back while sleeping can also trigger non allergic rhinitis; however probability of this condition is comparatively less than other conditions. It can cause sleep apnoea or acid reflux as well.

1. Occupational hazards that contain working in conditions that involve harmful fumes from the factories.

2. Being older than 20 years of age is also one factor that can increase the risk of non allergic rhinitis.

3. Having menstruation in females and pregnancy is also a risk factor for this type of rhinitis because of hormonal changes

4. Prolonged use of nasal drops or nasal sprays that actually increase nasal congestion and rebound to congestion issues.

5. Getting exposed to certain irritants in the environment or second hand smoke can increase the chances of falling for this condition.

6. Health issues consisting of chronic conditions that can cause or worsen the condition of rhinitis, hypothyroidism, chronic fatigue and diabetes.

IHU COVID-19 Variant: Here Is Everything You Should Know