Is Social Media Spoiling Your Relationship?

Is your relationship going off the bumpy road because of social networking? Worrying won’t help. Try these rules to keep it relationship safe.

Are you hurt when your partner “likes” someone’s (opposite sex) photos that they hardly/never see? Or worse, they become “friends” with someone they hardly know or never met? 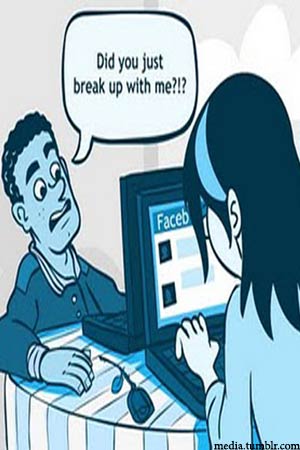 These situations can put an otherwise confident and irrational person in uncomfortable position. What naturally comes into mind is the question that ‘why is my partner taking so much interest in this person’ or ‘why is he/she sharing too much with their cyber family.’

Previously, social networking sites were used for keeping in touch with distant family and old friends but in recent years it has encroached into all aspects of our lives, especially the closest relationships.

[Read:Causes of infidelity in relation]

Social networking sites may not tag themselves as dating sites but given their social nature, a lot of them are suited for finding dates.
What starts as a “Hey, how are you buddy” turns into a fully fledged affair in no time.

But this is no fault of the website one is using. It depends on the individuals for what they are looking out for and their discretionary power about how much sharing is not too much.

According to the American Academy of Matrimonial Lawyers (AAML), Facebook is the reason behind every fifth divorce in the US. This does not mean that India is safe from the trend. Break-ups and divorces because of Facebook and other social networking sites make up to dangerous statistics.

Divorce or break-up seekers cite reasons like inappropriate messages or photos sent to members of opposite sex, posting nasty comments about partner and friends reporting a partner’s online behaviour.

If you are finding your relationship struggling with the high tides of social networking, try applying the following rules on yourself and your partner:

People who spent more time on the site had more Facebook-related conflicts and negative relationship outcomes. Logging-in twice a week is even better. It will allow both of you to catch-up with each other rather than the whole world.

People in a new relationship should talk to each other before screening it up their walls. Premature relationships need privacy to grow intimate. Shouting it to the world does not make it official. Strengthening it offline does.  “Facebook official” before you’re actually official. “You need to have that conversation before you change it,” says Wendy Walsh, PhD, author of The 30-Day Love Detox.

[Read:How to Detox your Relationship]

Even if you’re just mindlessly scrolling through your feed while watching TV with your partner, it can give off the impression that they’re not as important to you, says Christie Hartman, PhD, author of Find the Love of Your Life Online. “Be aware of what you’re paying attention to,” says Hartman. “If they start complaining or showing annoyance, it’s a sign that you’ve gone too far.”

“It’s really easy to log on and imagine that there might be a bigger, better deal out there,” says Walsh. Plus, you may end up shooting off a passive-aggressive rant that you’ll later regret, says Hartman. Your wall might be beaming with photos and feeds of happy couple which could make you feel worse about the rough patch you are going through.  Do not surrender to the urge of posting your grief or anger online.

Hartman says that a little bragging online is totally healthy for your relationship: “It shows that you aren’t on Facebook ignoring your partner—you’re including them.” So feel free to tweet about your boyfriend’s awesome promotion or Instagram the flowers he surprised you with. Just don’t go overboard, warns Hartman, or it won’t seem sincere.

Don’t let the past ruin your present

Be cautious while befriending an ex. While you probably don’t want to make a point of befriending an ex after you’ve started dating a new person, it’s important to tread carefully even if one or both of you are already friends with your exes. Stay cautious about your interactions with them, says Walsh. Her suggestion for staying on your toes: “Imagine that someone has the ability to cut and paste whatever you type and post it publicly.”

Trust us; you do not want to find a place in the league of relationships-gone-wrong because of social networking. I can be hard to resist the temptation, but remember- the person you love is more important than random people from the virtual world.