Here’s How to Stop Biting Your Nails: Reasons, Side Effects and Controlling Nail Biting

Most of the people, knowingly or unknowingly bite their nails. This habit is not just disastrous for nail health but also leads to other health problems

As per a report in an International newspaper, a girl in the UK had to go in for thumb amputation when she developed rare skin cancer due to biting of nails. As mentioned in the report, Courtney Whithorn was a victim of bullying and bit her nails whenever anxiety hit her. As per her reports, she had acral lentiginous subungual melanoma due to which she had to undergo a significant treatment. However, nail biting starts as a reason for something as silly as boredom. Even though such cases are rare and have no apparent sources of direct relation to biting of nails, but this habit can lead to several other health problems as well. 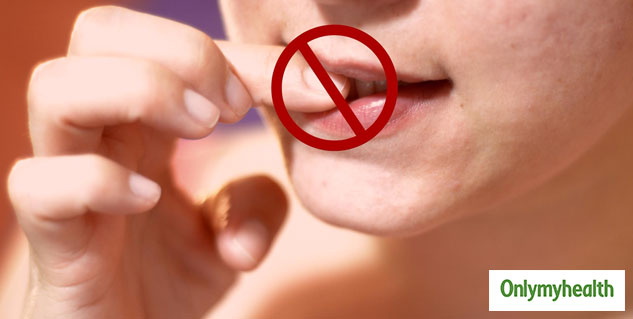 Nail biting is a common habit found in people of all age groups. Most people don’t even realise when they get habituated to nail biting. It not just looks unhygienic but is a gateway to other health problems as well. Also known as onychophagy in medical terms, this oral compulsive habit can be tough to change or leave. Nail biting can also be a reason for stress and anxiety in an individual. There are several reasons for which one should put an end to nail biting:

There is no definite cause of nail biting discovered but can be a reason for several psychological problems like Obsessive Compulsive Disorder or due to stress and anxiety. At times, it is also a reason for boredom and short attention span, either while working, studying or just sitting while sitting idle.

Also read: Here’s What the Colour of Your Tongue Reveals About Your Health

Side Effects of Nail Biting

Following are some of the side effects that one can encounter due to biting of nails:

The habit of biting nails cannot be stopped suddenly. It takes ample time and some necessary precautions to control nail biting:

Read more articles on other diseases