Causes And Symptoms Of Hemophilia In Kids

Here is everything you need to know about the causes and symptoms of hemophilia in kids.

Hemophilia is an inherited bleeding and blood disorder. Clotting factors are needed for the blood to clot in the spot. However, children who suffer from hemophilia cannot stop bleeding because they don’t suffice enough clotting factor in their blood since these blood clots caters to prevent excessive bleeding.

The 3 stringent forms of hemophilia include as the following:

This is caused due to the lack of the blood clotting factor VIII. It is noted that around 9 out of 10 people with hemophilia have type A disease. This is also referred to as the classic hemophilia or factor VIII deficiency. 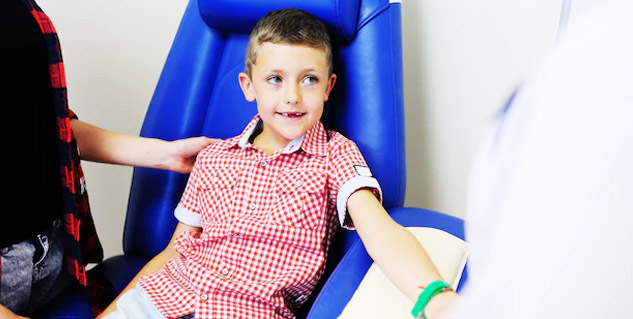 This is caused by the deficiency of factor IX. This is also known as the Christmas disease or factor IX deficiency.

Some doctors use this term to refer to the lack of clotting factor XI.

Also Read: Hemophilia Symptoms: These 3 Conditions Could Be Possible Indicators Of Hemophilia

Causes Of Hemophilia In Children

If the gene is passed on to a son, he will most definitely suffer from the disease.

If the gene is passed on to a daughter, she will be a carrier of the disease.

If the father of the child suffer from hemophilia but the mother does not carry the hemophilia gene, then none of the sons will have hemophilia disease. However, in the same situation all of the daughters will be carriers.

The severity of hemophilia in children totally depends on the amount of clotting factors in the blood. Affected children  perhaps may not even be diagnosed of the disease until bleeding complications from a surgery occur. The symptoms of hemophilia may include:

Bruises can occur from even small accidents like falling or bumping into something. This however results in a large build up of blood under the skin causing that area to swell. Mostly, children are diagnosed around the age of 12 to 18 months.

There is a likelihood for the child to bleed from the nose, mouth, and gums with minor injury. Bleeding while brushing teeth or during some dental work often suggests the signals of hemophilia.

3. Bleeding into a joint or muscles

Hemarthrosis or in simpler terms, bleeding into a joint can cause severe pain, immobility, and deformity if not treated well. This is the most common sign of complications due to the hemophilia bleeding. These joint bleeds can lead to chronic, painful, arthritis, deformity, and crippling with repeated occurrences in the concerned child. Bleeding into the muscles can cause swelling and unbearable pain.

4. Bleeding in the brain from injury

Bleeding from injury, or sheer suddenness in the brain or around the head, is the most common cause of death in children with hemophilia. It is the most serious bleeding complication. Bleeding in or around the brain can occur from even a small bump on the head or a mere fall. Small bleeds in the brain leads to temporary or permanent blindness, intellectual disability, and/or several kinds of neurological deficits. In some cases, it can even lead to death if not diagnosed or treated properly.

Everything You Need To Know About STI And It’s Prevention, Doctor Elucidates