Food poisoning during pregnancy is potentially deadly for the mother as well as the baby. 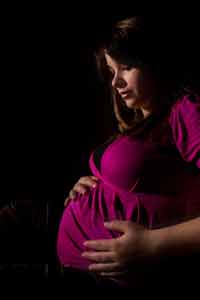 Pregnancy is a time when one must be especially careful and may be almost fastidious with health issues. Simple illnesses can actually have severe repercussions on the health of the carrying mother in general and the foetus in particular. One such illness is food poisoning that hardly assumes any seriousness in normal circumstances, until it requires hospitalisation. Food poisoning during pregnancy, however, might have to be inspected closely. Considering that “food poisoning” is a generic term, the forms and specific symptoms corresponding to each  must be studied specifically.

A lot depends on the nature and intensity of the bacteria that has resulted in food poisoning. If the symptoms are mild such as manageable abdominal discomfort etc, the impact on the mother and the baby is perhaps negligible and there shouldn’t be any cause of worry. If the intensity of the illness gives rise to severe vomiting spells, complete exhaustion or dehydration, the foetus may be adversely affected.

Some doctors believe that pregnancy is associated with dwindling immunity levels. In some cases, however, the immunity levels may actually be heightened during pregnancy. It is the vulnerability of the unborn foetus that worries doctors. The extent to which the baby may be affected depends on the reserves of the mother, the gestational age, the antibody status and the uterine environment. In case the mother braves the illness without any ill effects, the foetus would be in a better position to combat the same.

[Read: What Not to Eat when Pregnant]

If the food poisoning during pregnancy occurs in fairly early stages of the disease, the damage will probably be minimal on the foetus, especially if the mother manages it well. This is because  rapid cell development does not take place in this phase. Therefore, the harm is positively minimal.

Most often food poisoning during pregnancy is associated with uncomfortable symptoms such as vomiting, stomach cramps, frequent visits to the toilet etc that can seem severe when pregnant. When taken care of promptly, they can hardly prove to be hazardous for the unborn child. During pregnancy, however, the best precaution from food poisoning is to avoid food from restaurants. Furthermore, proper food hygiene should be maintained at home. In case symptoms of food poisoning have been detected, immediate medical supervision must be sought.