Inflammatory bowel disease can be very painful and does not have initial symptoms. Know the factors causing this disease.

Good digestion is really crucial for our overall health. If our digestive system malfunctions then there are multiple diseases and infections which may attack our body and make us severely sick. Bowel movements are also a part of digestive system and thus they are responsible for keeping digestive tract clear and working. However many a times, when there is an inflammation in the digestive tract, then several bowel diseases and disorders take place in the body. All these inflammatory bowel diseases involve chronic inflammation which can affect multiple functions in the body. Let us understand about inflammatory bowel diseases today and its effect on our health.

What Are Inflammatory Bowel Diseases?

Expert Dr. Sumeet Nigam, General Physician from Sahara Hospital, Lucknow explains about this disease in detail. He says it is a group of intestinal disorders which can take place at multiple locations in the body along digestive tract. This may include mouth, oesophagus, stomach, small intestine and large intestine.

Inflammation can be caused in any part resulting in poor or irregular bowel movements. Digestive tract is responsible for breaking down food and extracting nutrients from it. When this process does not go as usual, it causes inflammation. This can be a very painful and irritating disorder; it can even be life-threatening at times, if the person is not careful. Inflammatory Bowel Diseases can compromise of different types, most common among them is Ulcerative colitis and Crohn’s Disease. Both of these diseases can also be caused due to multiple factors. 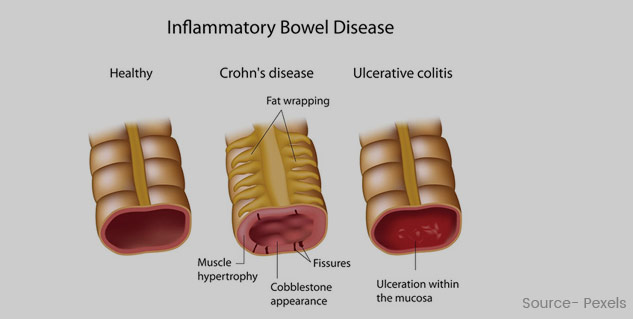 Ulcerative Colitis- This is a condition where the inflammation occurs in the large intestine. It is caused in the superficial lining of the intestine and rectum that involves sores and inflammation.

Crohn’s Disease- This type of inflammatory bowel disease in caused due to inflammation in digestive tract. It is a severe disease and can often involve deeper layers of intestine inflammation which can be hard to treat.

There can be several factors due to which IBD can be caused. The exact cause of it is hard to tell but the most common causes of bowel diseases are due to the following-

If there is anyone in your family who has inflammatory bowel disease, then it is more likely that you will have it as well. In many cases it was seen that patients with IBD also had someone from their family having this disease.

Your immune system plays a vital role in defending the body from inflammation and pathogens that cause infections. Most common cause of any digestive disorder is because of bacterial infection. Bacteria or virus may infect your digestive tract and cause inflammation due to lack of immunity in the body. Healthy immune system reduces the chances of catching inflammation.

However in some cases Inflammatory bowel disease can happen even with strong immune response. This is because digestive tract inflammation can even occur when there is no infection, thus the immune system attacks its own body cells. This can go up to several months.

Also Read- Know Cause, Risks And Treatment For The Cholesterol Embolism Syndrome

This is one of the major risk factors for developing IBD. Smoking is also responsible to cause more pain in the digestive tract and increases the risk of complications as well. It causes Crohn’s disease and increases the severity of infection in the body.

Inflammatory Bowel Disease can occur in any age group but the chances of infection increases in people who are above the age of 35 years. However, the infection starts growing before that, but in most cases, it is not detected. People above the age of 60 years increase the risk of having this disease even more as their immune system becomes weaker and risk of infections increases. 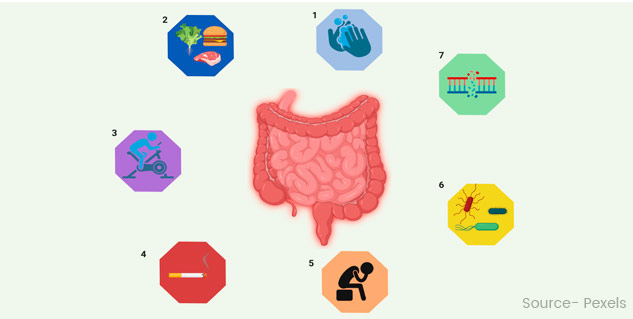 People of urban areas are more likely to fall for this disease because they tend to eat more of processed food, hence increasing the risk of IBD. Since it is a digestive tract disorder, therefore the food we eat plays a major role in probability of infection. Also people living in the northern climates are more vulnerable to inflammatory bowel disease than the rest.

It also affects the way you live including lifestyle and type of job. Having a sedentary lifestyle or job actually increases your chances of having this disease as well. Though, interestingly physical activity in the pre-illness time reduces the risk of this disease.

What are the Symptoms of Inflammatory Bowel Disease?

Symptoms vary a bit according to the lifestyle and severity of infection. But most common symptoms of it are-

Inflammatory bowel movements can be very painful and irritating. It can cause crohn’s disease or ulcerative colitis. IBD can happen in any of the parts of digestive tract including mouth, oesophagus, stomach, intestine and rectum. It can be caused due to multiple reasons and result in severe complications if not treated within time. Inflammation in digestive tract is usually due to bacteria and virus but it can also occur with help of other factors. Symptoms of this disease depend on the severity and type of disease. Consult your doctor as soon as you get any of these symptoms.