Did You Know Coffee Addiction Can Harm Your Fertility? Read Doctor’s Observation

Caffeine can negatively impact your health if consumed in excess. Fertility problems may also be experienced due to caffeine overconsumption.

Caffeine consumption has been linked to a woman's ability to conceive in some studies, but not in others. Most experts agree that there isn't enough evidence to draw firm conclusions about caffeine and fertility. Another thing to keep in mind when reviewing research on caffeine is that it is not clear whether it is caffeine that causes fertility problems, or whether there are other lifestyle choices or habits that may be more likely to cause caffeinated beverages. According to Dr. Hima Deepthi, Fertility Consultant at Nova IVF Hyderabad, people who smoke are more likely to drink large amounts of coffee and alcoholic beverages. This can explain to a certain extent why previous studies have found a strong negative impact on fertility. People who drink a lot of coffee may also be smokers. We know that smoking can damage fertility.

Caffeine may have an effect on the quality of sperm, but it is unclear whether this affects men's fertility. While a few cups of coffee, tea, or cola aren't known to affect the father's fertility, caffeine in excess, such as that found in 4-6 cups of coffee per day or more, can lower the counting of sperm. Caffeine in large doses can also have an impact on sperm quality, so dad-to-be should limit his caffeine consumption.

Coffee/caffeine consumption in men is associated with elevated levels of testosterone and sex hormone-binding globulin (SHBG).  It is speculated that caffeine will alter the glycolytic and oxidative characteristics of supporting cells, thus interfering with male reproductive potential. However, the mechanism behind the possible harmful effects of caffeine is unclear. In the foetus and adult life, caffeine can act indirectly by affecting the hypothalamic-pituitary gland system or by direct toxic effects on the germinating epithelium. Furthermore, it is assumed that the consumption of coffee will not only affect the semen parameters, but also the integrity of the sperm DNA. Considering that DNA damage in human sperm can also be determined by testicular or post-testicular damage (including oxidative stress), this aspect has potential relevance.

Although studies on caffeine and fertility provide conflicting evidence, it is wise to limit your caffeine intake when you are actively trying to get pregnant. Too much caffeine is associated with an increased risk of miscarriage, especially in the early stages of pregnancy. Eating large amounts of caffeine can lead to low birth weight. 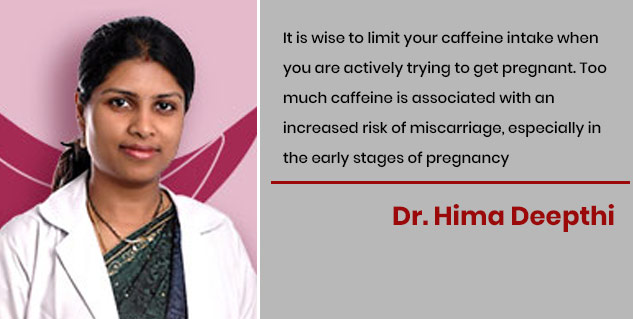 Caffeine is also a well-known stimulant, which is why most people cannot get through the day without ‘taking medicine’ in the morning. Due to caffeine, the vibrations you experience during alertness can also cause your blood pressure to rise. If you are already dealing with an increase in blood pressure, you may be at risk for pre-eclampsia, which is a dangerous condition of pregnancy.

Although experts are unable to explain exactly how caffeine affects women's fertility and baby health, they do agree that high doses may have some negative effects. What effect does caffeine have on the body?

How Much Caffeine You're Consuming?

If you want to use caffeine safely, it is recommended to consume no more than 200 to 300 mg of caffeine per day (100 mg is best). This is the method currently recommended by reproductive endocrinologists for couples who have difficulty getting pregnant.

Although researchers haven't found a clear link between moderate caffeine consumption and fertility issues, it's generally thought to be safe to consume 200 to 300 milligrams (mg) of caffeine daily while trying to conceive. For a weak brew, that's up to two 8-ounce cups of coffee. If you get more than that, you should probably cut back.