Health benefits of Ginger:Know how this wonder herb keeps you healthy

Here‘s a list of some of the amazing benefits of ginger that you may not be aware of. Ginger contains chemicals that may reduce nausea and inflammation.

Ginger is not satisfied with just being a culinary marvel. There are several health benefits of it that sometimes are more effective than medications- and without posing any side effects. 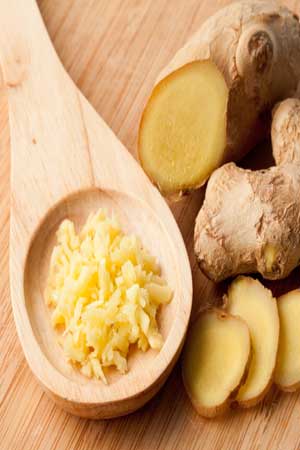 Full of aroma, pungency, and spice, ginger adds a special flavour and zest to Asian cooking. There must hardly be a cook who wouldn’t find ginger’s culinary qualities to be delightful, and the health benefits it offers are also quite stunning.

It can treat staph infection, kill cancer cells, is anti-inflammatory in nature and can cure gut problems. Mentioning its gastrointestinal soothing properties is just the beginning of its uses.

Let us discuss in detail how ginger shows to be benefit our health.

Studies have evidenced that ginger possesses ability to kill certain aggressive forms of cancer. Results of a research by University of Michigan, presented in a session at the American Association for Cancer Research, show that in every single instance where ginger powder was used to treat cancer cells, they all died as a result of being exposed to the compound.

At the 97th Annual Meeting of the American Association for Cancer, lab experiments presented by Dr Rebecca Lui and her colleagues from the University of Michigan, showed that the active phytonutrients in ginger (gingerols), kill ovarian cancer cells. They did so by inducing apoptosis (programmed cell death) and autophagocytosis (self-digestion).

Prostate cancer also shows to be dreadful of ginger’s healing power. The results of an American study published in The British Journal of Nutrition stated that ginger extract (zingiber officinale) killed human prostate cancer cells while healthy prostate cells were left alone. The prostate tumour size was revealed to be reduced by a whopping 56% with the help of whole ginger extract.

Ginger is very effective in preventing the symptoms of motion sickness, especially seasickness, according to double-blind studies. In one study, ginger was shown to be far superior to Dramamine, a commonly used over-the-counter and prescription drug for motion sickness.

Symptoms associated with motion sickness including dizziness, nausea, vomiting, and cold sweating are subsided by ginger.

Ginger is effective in relieving the severity of nausea and vomiting during pregnancy. This was confirmed by a review of six double-blind, randomized controlled trials with a total of 675 participants, published in the April 2005 issue of the journal, Obstetrics and Gynaecology. The review also confirmed the absence of significant side effects or adverse effects on pregnancy outcomes.

Physicians found that 75% of arthritis patients and 100% of patients with muscular discomfort experienced relief of pain and/or swelling. This was observed through two clinical studies involving patients who responded to conventional drugs and those who didn't.

This is because ginger contains very potent anti-inflammatory compounds called gingerols. The reason why so many people with osteoarthritis or rheumatoid arthritis experience reductions in their pain levels and improvements in their mobility when they consume ginger regularly is explained by these substances.

Ginger provides warmth on a cold day, and helps promote healthy sweating. This sweat assists detoxification. German researchers have found that sweat contains a potent germ-fighting agent that may help fight off infections. Investigators have isolated the gene responsible for the compound and the protein it produces, which they have named dermicidin.

Body’s sweat glands manufacture dermicidin, which is transported to the skin’s surface. Here, it provides protection against microorganisms, including bacteria E. coli (which causes staph infection), and fungi, including Candida albicans.

Ginger is so concentrated with active substances; you don't have to use very much to receive its beneficial effects. For nausea, ginger tea made by steeping one or two 1/2-inch slices (one 1/2-inch slice equals 2/3 of an ounce) of fresh ginger in a cup of hot water will likely be all you need to settle your stomach.