How Sleep Cycle Can Depict Personality Traits, Explains This Study

People with similar sleep timings have a set of personality traits in common. This study established the link between sleep & personality.

There are so many things that sleep is associated with and your personality could be one of them. Whether your wake up early in the morning or sleep late at night, your sleep timings can tell a lot about you as a person. This is not a hypothesis but concluded from the study conducted by the University of Warwick and Tartu University. According to them, certain traits are common in people with the same sleep timings. To know what is yours, keep reading.

Sleeping patterns can not only assess your mood and health but also your personality traits. There are so many things common in early risers and night owls that they might have not known before. The Journal of Personality recently published a study titled ‘Personality Traits to Chronotype at Both the Phenotypic and Genetic Level’. This research talks about the link between sleep patterns, genetic and personality hierarchies of different people with the same set of sleep schedules. 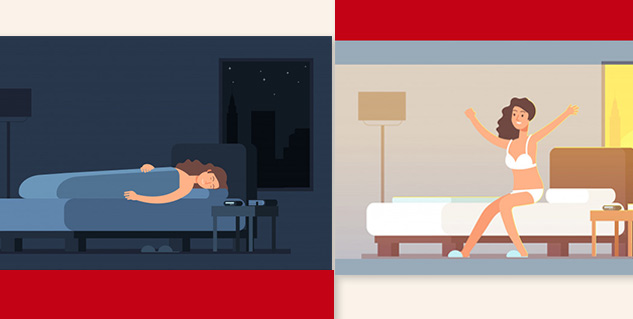 Also Read:  5 Bedtime Teas That Can Help You Sleep Peacefully Through The Night

The link between sleep timings and personality

She further added, “However, it could also be that chronotype influences personality or that chronotype and personality mutually influence each other. The findings of the genetic correlations support this view but further studies will be necessary to better understand the shared genetic mechanisms between the two constructs as well as the causality of their relationships.”

Also Read: What Does Your Smile Say About Your Personality? Another Professor Anu Realo said, “Not only have we shown there is a relationship between chronotype, personality and partially your genes, our findings also suggest that it might be possible to change your chronotype or at least train yourself into a different more socially convenient sleep pattern by increasing your self-control. Ideally, work hours would be adapted to your chronotype, but if not, evening people who typically experience worse health could learn to go to bed at earlier hours which might also accelerate the release of melatonin. It is also influenced by artificial light, so regularly turning off the lights at earlier hours might also lead to falling asleep at earlier hours of the evening. However, future studies will need to investigate whether such interventions to enhance self-control would result in a permanent change or would indeed promote better health in later chronotype.”

MORE FOR YOU
5 Throat-Soothing Teas To Sip During Allergy Season
Kangana Ranaut Tests Dengue Positive; Know About The Complications Of This Disease
Study Reveals Best Time To Eat Dinner For Weight Loss
Probiotics Guide: Know When and How To Take Them To Avail Best Benefits
What is Langya Virus? New Zoonotic Infection Found In China, 35 Infected So Far
Skin-Like Computing Chip Examines Health Data With Brain-Mimicking AI