How Long do the Symptoms of Malaria Last

Malaria is a serious medical condition transmitted by mosquitoes. If malaria is not diagnosed and treated promptly, it may last for months.

According to recent estimates from World Health Organization (WHO), there were about 219 million cases of malaria in 2010 and an estimated 660000 deaths worldwide. 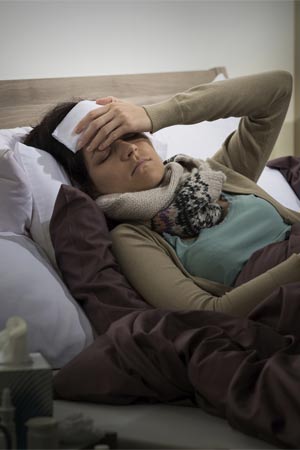 Malaria is a parasitic disease transmitted from one human to another through the bite of infected Anopheles mosquitoes. The most common symptoms of malaria are fever and flu-like illness. The symptoms of malaria develop slowly after infection. The parasites called sporozoites enter the bloodstream and multiply inside the red blood cells. They break open within 48 to 72 hours, infecting more red blood cells. It may take 6 to 12 months for an infected person to find out his/her illness.

Most symptoms are caused by the release of merozoites into bloodstream. Destruction of the red blood cells may lead to anaemia. The first symptoms of malaria occur within 10 days to 4 weeks after infection. They can appear as early as 8 days or as long as a year after getting the infection and in cycles of 48 to 72 hours.

There are four kinds of common malaria. Falciparum malaria is the most common and is much more serious than other types. It is a medical emergency that requires a hospital admission. Plasmodium malaria is the slowest replicating form of malaria. It can cause mild infections which last at least for weeks, if not for months. In a few cases, malaria symptoms last much longer because the infected person’s immune system is able to keep the powers of the parasite low enough so that the symptoms are not noticeable. In comparison to aforementioned malaria forms, other forms are less severe and their symptoms can last for 1-2 weeks.

The treatments used for malaria usually eliminate the parasite but it can take several weeks for the infected person’s body to recover from the disease. He/she may feel weak and tired for several weeks even after the treatment as your body replaces blood cells damaged by the parasite.

The possible treatments for chloroquine-resistant infections include the combination of quinidine or quinine plus doxycycline, tetracycline or clindamycin, mefloquine or artesunate and the combination of pyrimethamine and sulfadoxine (Fansidar). The treatment option of medication partly depends on where and when you were infected.

Malaria can be diagnosed by looking at blood samples; the parasites are visible under the microscope. After malaria is diagnosed, treatment should begin immediately. The treatment of malaria subsides its symptoms and cures it within two weeks. Without proper treatment, malaria episodes (fever, chills, sweating) can return periodically over a period of years.

How does Malaria affect the Red Blood Cells?