Esophageal Cancer can lead to life threatening health issues. Know what are surgical methods are available to treat this cancer & influencing factors

Number of people getting infected with diseases is constantly rising. One of the most deadly diseases that are cancer is one of them. Due to lack of information and awareness people ignore this disease until it becomes significant and inevitable. Esophageal cancer is one of the most common cancers which are caused due to tobacco and other harmful products. It can turn into very severe disease in no time without showing many symptoms. Today let us know what are the surgical options available and factors which influence esophageal cancer along with prevention methods.

Esophagus is a tube-like structure that runs from throat to stomach. Food enters from mouth to stomach through the Esophagus. Esophageal cancer begins in the inner layer of the food pipe and can spread out to involve the other layers of the Esophagus. It can also spread to other parts of the body (metastasis).There are two main types of esophageal cancer, Squamous and Aden carcinoma. Squamous type of can occur along the entire length of esophagus whereas Aden carcinoma occurs in the lower esophagus near the stomach and is believed to be largely related to acid and reflux disease. The stages of esophageal cancer are given a number (I to IV); higher the number, more advanced is the cancer. In general Stage I & II cancer are confined to esophagus, in Stage III disease spread beyond esophagus into surrounding structures whereas in Stage IV. The cancer has spread to other organs in the body.

What Are The Surgical Methods To Treat Esophageal Cancer?

There are different surgical options available to treat cancer depending on the severity and stage which it is at. It can be alone surgery or with the help of other treatments. Operations used to treat esophageal cancer are-

If the cancer which is present is very small and detected at right time then this option can be used. Considering that it is limited to superficial layer of esophagus, your surgeon may recommend removing of the cancer with some healthy tissues which it is surrounded with. Surgery can be done through endoscope in this method. Endoscope passes down your throat into esophagus and removes the cancer.

Also Read- What Are The Side Effects Of Radiation Therapy? Know From An Expert

What is Targeted Drug Therapy?

Targeted drug treatments aim to focus on specific cancer cells to weaken them. This can cause targeted cancel cells to die. Targeted drugs are usually given with chemotherapy for advanced treatment of cancer and cancers that do not respond to any other treatments. 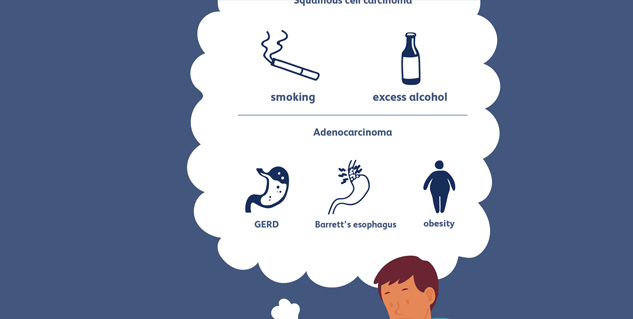 Factors which increase a person's risk of developing esophageal cancer include:

Risk of adenocarcinoma is higher in white obese men, but squamous cell carcinoma of the esophagus is more common in Asian and black population.

How Is Esophageal Cancer Diagnosed?

To diagnose esophageal cancer, doctor will review your symptoms and order few test like endoscopy, biopsy and imaging scans. Above information is required in order to plan your treatment.

• Endoscopy: Endoscope is a thin tube to examine esophagus or stomach and to take biopsy from unhealthy areas seen during endoscopy.

• Biopsy: During endoscopy, we can take tissue from esophagus for the confirmation of cancer.

• CT Scan/ PET CT Scan: It is done to look for disease spread (Staging) and assess response to treatment given for cancer.

• Bronchoscopy: A bronchoscope, a thin, lighted tube that is inserted through the nose or mouth to check for cancer involvement in the trachea or in airways.

There may not be any symptoms in the beginning. However in the advanced cases, symptoms include: 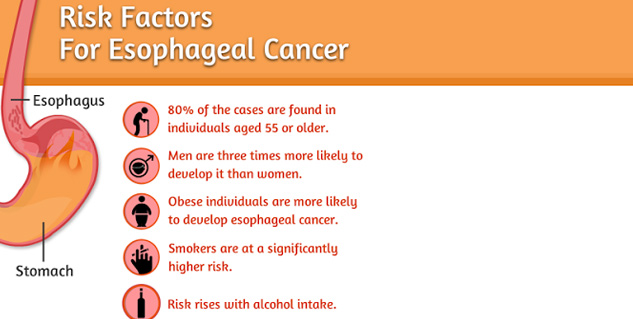 As with other cancers, treatment has greater chances of success if the cancer is detected early. Unfortunately, it is asymptomatic in early stages and by the time it is detected, it is often already in an advanced stage (has spread throughout the esophagus and beyond).

Treatment of esophageal cancer depends on many factors, including overall health or performance status of the individual and stage of the cancer.

Surgery: Surgery can be offered directly or after radiation and chemotherapy. It is an essential part of treatment and it includes either partial or complete removal of esophagus, sometime along with part of stomach.

Radiation therapy: Kills cancer cells with radiation and can be given before or after surgery, it is generally given before surgery to shrink tumor and help surgery.

Chemotherapy: Typically used in combination with radiation therapy before surgery and sometimes after surgery.

Also Read- What Are The Side Effects Of Immunotherapy? Know From An Expert

Although there is no sure way to prevent it but we can certainly reduce the risk of esophageal cancer by adopting healthy lifestyle and habits such as:

Esophageal cancer is a serious disease which is caused majorly due to smoking and consumption of tobacco. It has four stages and symptoms are not evident in the earlier stages. If the cancer becomes evident, then there are not many treatment options left. Depending on the severity of the case, surgery can be performed to take out the cancer and the infected areas near it. Treatment options such as chemotherapy and targeted drug therapy is also available. Factors which influence esophageal cancer and the people who are at a higher risk of getting infected with esophageal cancer are mentioned. To avoid this cancer one should look at the prevention methods and stop consuming tobacco in any form.

MORE FOR YOU
Top 10 Health Problems Faced By Millennials
How to Avoid Germs in Public Restrooms And Washrooms
What is Hypertensive Emergency? Know About Symptoms, Causes And Risks
Second Marriage Can Be A Life-Changing Decision For You, These Benefits are Proof
What Is Racial Trauma And How To Cope With It
5 Common Yoga Mistakes That You Are Making

What Are The Side Effects Of Immunotherapy? Know From An Expert