Most of us have allergy or sensitivity issues from one or the other substance or thing. This is a natural problem as our system might not be comfortable with it. Gluten sensitivity or allergy is also one of the problems faced by numerous people. This does not mean it needs to be treated because it comes naturally from the system to avoid it because it takes gluten as a foreign invader in the body. Gluten intolerance can be visible from the very childhood and it can cause some serious health issue if it exposed to the person a lot.

What is Gluten Sensitivity?

It is a condition where your body is allergic to gluten and its substances. We have Ms. Indu Mishra, Consulting Nutritionist to talk about this issue. She says that gluten sensitivity can occur because of various reasons that affect a person’s digestive system. In this type of sensitivity, gluten works as a invader or substance that is seen as threat to the body and immune response acts on it to alleviate it. Gluten sensitivity can occur by a mere contact with products of it. If you have gluten intolerance, three conditions can be the cause behind it. 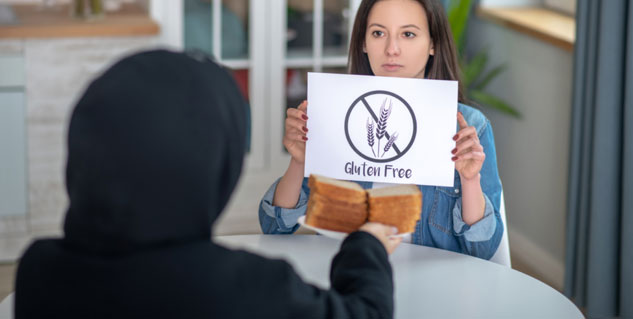 We will talk about these conditions affecting gluten sensitivity later, but Ms. Indu says that a person needs to be very careful if he is sensitive to gluten as majority of our breads are made up of it. Infact one should avoid eating meals or food outside as restaurants and food joints prepare most of their meals by adding gluten in it to increase thickness of the gravy or bread.

Intolerance of gluten substances can be related to three major health problems affecting it. These gluten-related conditions can make a person vulnerable to gluten sensitivity in majority of cases. Let’s discuss and know about these conditions below-

It is one of the most evident conditions responsible for gluten sensitivity. This is because it is an autoimmune disease which reacts to gluten proteins with immune response. Celiac disease is most commonly known gluten-related condition that is known to the people.

If a person suffers from celiac disease, it can have an effect on small intestine of the person that can damage the intestine and cause various health disorders such as diarrhoea, bloating, abdominal pain and vomiting.

Celiac disease causes prolonged gluten exposure in people that can affect various conditions due to lack of gluten nutrient in the body. Because of this, these conditions become more evident in gluten sensitive people- Different people experience variety of symptoms during this disease and it gets hard to make out the exact symptoms of this disease. Celiac disease related to gluten sensitivity can also occur in people suffering from other autoimmune conditions and type-1 diabetes.

Also Read- Itching In Armpits? Know These 6 Causes Of Armpit Rashes And Tips To Prevent It

This is prevalent in people that have allergic reactions to protein present in wheat. Those who have wheat allergy are sensitive towards proteins present in the wheat. Similar proteins are also present in gluten, because of this people with wheat allergy also develop gluten sensitivity in particular conditions.

Having gluten sensitivity because of wheat allergy is more prevalent towards children as they get caught up with the related protein substances more often. Also their immune response to allergies is high and even similar nutrients of different compounds can cause sensitivity in children. Histamine compound present in wheat can trigger gluten sensitivity in some cases as well. If a person experiences gluten sensitivity from the above listed symptoms, then it also rules out the condition of having celiac disease by 80% or more. NCGS can be diagnosed like any other food sensitivity. You need to make sure that you keep distance from food products that might have gluten in it. Gluten-free diet can be the best option for you, till the cause of it is known.

World Alzheimer's Day 2021: Conditions That Causes Alzheimer’s And Its Condition In The Country