Many of us have tried or thought of Zumba and enjoyed it. Some join Zumba for fitness or an entertainment purpose, but for Sucheta Pal this was her life turning point. Created by Colombian dancer and choreographer Alberto Beto Perez, Zumba has gained popularity across the world. Zumba has grown exponentially within the Indian fitness industry, except for Sucheta Pal, It set her on a path of new direction, gave her a successful career and saved her life. This is what she has to share with us on her journey: 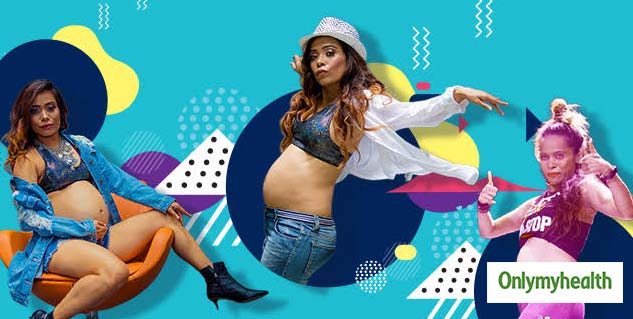 The average 25-year-old lived in Mumbai with a stressful 9 to 9 job realised how unhappy she was with the stress of the job that took a heavy toll on her health and well being, pushing her towards anxiety disorder. Pal’s troubles began with Irritable Bowel Syndrome that troubled her at work. The disorder became critical to the point that it that greatly affected Pal’s confidence levels and, eventually, led to anxiety attacks. “It was very embarrassing, it can strike you at any time, and you have to use the restroom, there’s no option. I speak openly about it. I didn’t for a long time, and it caused me social anxiety. I couldn’t face people – if I have to enter an elevator and was a single person in that elevator I used to take ten slow stairs down. In a meeting, I would take four breaks in between to use the restroom because I would be so tense, but now I have overcome these fears, and now I travel across the world with no fear.”

Woohoo 3rd trimester & I can't even begin to express how excited I am for my #BabyShower this Sunday in Mumbai with 25 of my dearest girls....and the best part it's on my birthday...yayyyy! You know my #instastories will be �� on 13th October!!! . . My talented sis @pushpitagaur has planned the entire thing for months now and I have no clue except how the invite looks like!! Swipe ⏩( isn't it cute... my 7 and 13 year old nephews handpainted and handmade it❤️) I also have a customised #babyshower �� from @si.ta.ra (And I thought I wasn't the #babyshower kinds��....but I totally ammmm...bring it on��) . . I kept getting doses of #babyshower expereinces in Delhi, Jaipur, Pune and Chennai on the #pregantandperfect tour and blessed for that ❤️ but the first mini celebration happened in Hyderabad months back by a dear friend @abhilasharathi ( Swipe extreme ⏩Check out the last video on this post) It was my 1st trimester and I felt and looked washed out but that lil gesture truly is etched in my memory�� Thankyou Abhi & was so needed. @aparajetadas hugs for being there. . . Grateful for lovely friends and family! #babyshower #onmybirthday #sundayfunday #pregnancylife #suchetapal #pregantandperfect #preggerlife #preggo #babybump #babyshowertheme #friendslikefamily

Also Read: If You Are Expecting And Suffering From Winter Blues, Then Follow These 3 Hacks

To survive it all, she ended up doing three odd jobs surviving on Vada pav. Starting from Working for an NGO to selling books for a commission, she’d travel by train and bus in a saree, across the city to talk to school principals about the importance of speaking and teaching English to students, managing karigars in Dharavi factory for a fashion house to make sure that they’re making leather bags properly.

“For three years, I trained in every possible format of Zumba that’s where I discovered Zumba and taught across the state of Connecticut as a licensed instructor. I had received a call in April 2012 from Zumba Miami headquarters to audition for the role of the lead Zumba Education Specialist for India that was a turn in my life. I relaunched Zumba here in May 2012, and since then I have been enjoying my work as my role was to train the trainers.”

ANNOUNCEMENT��Back this year teaching in Florida at the Annual #ZumbaConvention2020, Orlando♥️ Stay tuned for all info soon! ( Side question: Do I color my hair a fiery red again?��) . @zumba is one of the few fitness brands with the world's largest family of licensed instructors teaching millions of classes across 186 countries. It's called the @zincommunity . Hope you are part of it by now�� #BestJobintheWorld . . ��Thousands of talented and hardworking licensed #ZumbaInstructors from across the globe meet for a 4-day insaneeee annual @zumba convention in Florida to learn and upgrade every year. . . It's an honor to be chosen to be part of the presenter team for this #ZumbaConvention among some amazing talents each year and I can't wait to go back in 2020 after my break! YAYYYYY�� My India ZINs hope to see you there this year! . . And this pic is my perfect #FlashBackFriday ��♥️��

Now she has more than 4000 Zumba instructors and a team of 10 master train, striving to inspire a healthy and fit lifestyle in India.

Nowadays, in India, Women have known the importance of fitness. Fitness has become the next alternate career for people, especially for women.

“I have had the privilege to visit Military cantonment in Jammu and Kashmir, where I taught military wives to become instructors. I had the privilege to coach 12 of them, and they’re training the military wives across various places. Imagine where we’re going. I have even trained women in Gujarat who couldn’t even tell their families that they are going for this training. From where I started, I feel like I have a second life now as I’ve come out of many fears. It is all about gaining confidence, being confident in your skin, with your fears and telling yourself that it’s okay not to be okay. Mental health should be taken seriously.”

Today as most families in India pray to Goddess Lakshmi to give prosperity and create financial abundance I may have a lil trick that you can use to ensure your prayers come true. One of the most frequent reasons why people fail when manifesting money relates to the very way that we tend to perceive money. It's with stress and anxiety. Most of us have grown up thinking.... . . “Money is a limited resource.” “You have to work (too) hard to get wealthy.” “It’s selfish to want a lot of money.” “Money is the root of all evil.” “My family isn’t rich, and I probably will never be rich too.” “The chances of becoming rich are really low.” . In order to create financial abundance, we need to let go of these disempowering beliefs. But instead focus on what money offers you, not what it could offer you, so that you’re properly connecting with the reality of manifesting money. . . So, you might start with “Money lets me travel to the place I want to see” then add “Money allows me to decorate my home the way I’ve always wanted to” and “Thanks to money, I’m better able to help other people and change lives.” I’m grateful for the money that allowed me to grow up without worrying about whether food would be on the table” or “I’m always grateful for the money that let me have the amazing experience of _____” and “I feel grateful when I think about the money that has permitted me to sleep safely and comfortably each night.” . . Each person’s reasons for gratitude will be different. The key is just to make a clearer connection between your desire to make money and your conception of money as a positive, good, generous force in the world. Wishing you a Happy abundant Diwali ����

Also Read: Exercises For Pregnant Women For Health, Happiness And A Glowing Face

She believes, “It not only makes you fit and healthy physically but also mentally. The transformation that you see is worth it. I cannot stress the fact that I have experienced this myself and how it changed my life completely, from overcoming social anxiety disorders and panic attacks. Zumba has given me the will power and strength of mind”

How to Deal with Chronic Illness Linked Depression