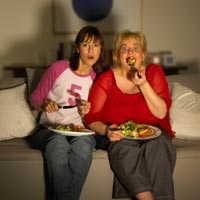 Is your waistline expanding? If it is and you are wondering its cause, take a look at your friends and those in your social circle. According to a research published in the New England Journal of Medicine, obesity is contagious and spreads the fastest among friends.

The research was funded by researchers from Harvard and the University of California, San Diego, and carried out by way of reviewing a database of about 12,067 densely interconnected people. The group included several families and friends, who were a part of an American heart study between 1971 and 2003. The participants met heart researchers almost every two to four years. To ensure the research was in tune with the time and continuity of the study, the researchers took the contact numbers of at least one friend or family member, who could be contacted if the participant changed address.

According to the study’s analysis, when a participant’s friend was found to have grown obese, the first participant had a 57% greater chance of becoming obese. Pairs of people, who identified each other as close friends had a 171% chance of following suit. The researchers said that eating was not the last reason to being obese. The best evidence to the fact that obesity is contagious was observed in the fact that people organized their behaviour on the actions of those around them such as close friends. Dr. Nicholas Christakis, a key investigator in the study said that friends affect each other’s perception of fatness i.e. when a person becomes obese, his or her friends tend to think that obesity is not as bad as it is thought to be.