Well, it can be painful to witness how diseases can turn around a person’s life. There are many life-threatening diseases that you absolutely have no idea of until it becomes serious. One of them is cancer.  This month, we are bringing out various topics pertaining to women’s health. So in this article, let us learn about Cervical Cancer. Cervical cancer is one of the diseases which takes up many lives, and most people remain unaware of it.

What Is Cervical Cancer?

Cervical cancer happens to be in the lower part of the uterus that connects to the vagina. Various strains of Human Papillomavirus (HPV) are responsible for causing this cancer. It is a sexually transmitted infection that is very common to occur in women who are sexually active. Also Read: Watch Out For The Risk Factors And Early Signs Of Cervical Cancer

Who Can Get Cervical Cancer?

How Does Cervical Cancer Happen?

When the body is exposed to the Human Papillomavirus, the body’s immune system mostly prevents the virus from doing any type of harm to the body. In a small percentage, the virus is capable of surviving for years, contributing to the process, which can cause cervical cells to become cancer cells.

We at OnlyMyHealth have specialised doctors to help you out with your issues. Hence we asked Dr Rudresh Tabali, Consultant Surgical Oncology, HCG NMR Cancer Centre, Hubli, for his expert opinion on this cervical cancer. He said, “The disease can be prevented by regular screening, immunizations, and vaccinations. The screening interval is every three years, and types of screening methods are PAP smear and HPV DNA testing. Screening tests are simple, and they are the most effective way of identifying disease at a pre-invasive or early stage. So the disease can be picked up early, treated effectively, prevent all morbidity and mortality associated with this deadly disease.”

The major way of identification of cervical cancer is through regular screening and Pap tests.

Following are the symptoms of cervical cancer that you must know about:

These are the signs which can reveal that you might have cervical cancer. But it is not necessary as there are no major symptoms in the beginning. Therefore kindly consult an expert doctor for the same. There are majorly two types of cervical cancers: Squamous Cell Carcinoma and Adenocarcinoma.

There are stages to determine cervical cancer and the seriousness of the disease. Let’s find out what are the stages at which Cervical Cancer may be determined. Cervical Cancer tends to grow slowly, which in general is good for determining the stage well before. The earlier it is diagnosed, the better and more are the chances to treat cancer and get well.

Cause of Cervical Cancer

It is a deadly disease if it has spread out to a large part of the system. Most Cervical cancer happens due to HPV infection. Human Papillomavirus is one of the most common infections in woman’s reproductive system. It generally occurs in most sexually active people. HPV is easy to transmit as it took the skin to skin contact. Cervical cancer can happen even if you have not had penetrative sex. Most of the times, HPV clears up in almost two years, but there are chances that you may catch it again if you are sexually active.

Even if cervical cancer may not occur as a most destructive disease, some factors can help it in developing like one. Here is the list of factors that can affect Cervical Cancer-

There are a few prevention methods that you can take to avoid cervical cancer or cure it at an early stage.

There are ways through which cervical cancer is diagnosed. Pap tests can check for abnormal cells but do not confirm if they are cancerous. Hence for confirmation, you need to go through a cervical biopsy. For diagnosis, a sample of tissue is taken from the cervical canal, and this process is called Endocervical curettage. This can also be done through a Colposcopy, where the doctor uses a lighted magnifying tool to get a closer look inside the vagina and cervix. It is also possible that your doctor may want to perform a cone biopsy to get a clear, larger cone-shaped sample of cervical tissue. It is an outpatient surgery and involves a scalpel or laser. 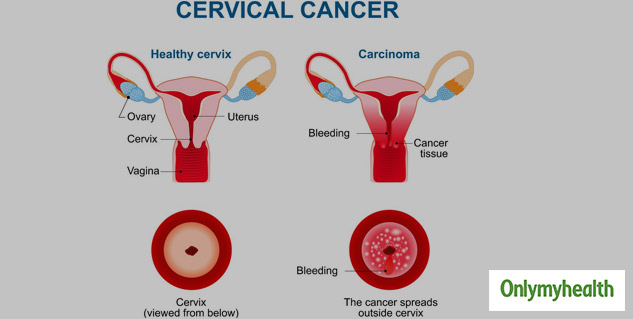 Cervical cancer is caused by HPV infection majorly. It is a deadly disease that happens to Women who are more sexually active. Cervical cancer is seen in ages from 35-44 as it takes 15-20 years to mature. There are two types of cervical cancer, out of which Squamous cell carcinoma is more evident. The good part is that it can be treated, and vaccination is also available for Cervical Cancer.

MORE FOR YOU
Indian Origin Woman Who Was Given Few Months To Live Now Cancer Free After Drug Trial In UK
New AI To Detect COVID-19 From Chest CT Scans
World Chocolate Day: How Dark Chocolate Can Aid Blood Glucose Control
New Omicron Sub-Variant Detected In India: WHO
Do Probiotics Really Help Improve Vaginal Health? Let’s Know From A Doctor
Drugs That Can Let People Live To 200 Years Are Being Developed