A new study has unearthed the mechanism underlying the link between smoking and alcohol abuse. Smoking puts one at a greater risk of alcohol abuse.

Smoking has always been known as a risk factor for subsequent alcohol abuse but now the link between the two has been discovered. 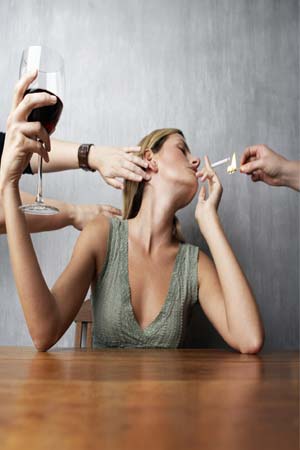 A new study claims that even a one-time exposure to nicotine may change brain’s response to booze.

"Our findings indicate the mechanisms by which nicotine influences the neural systems associated with alcohol abuse, providing a foundation for conceptualising strategies aimed at diminishing the link between smoking and later alcohol abuse," said senior author Dr John Dani, of the Baylor College of Medicine in US.

Dani and his team found that rats exposed to nicotine subsequently sought to drink alcohol more often than other rats. Also, signalling in the brain's reward system was dampened when the nicotine-exposed animals consumed alcohol.

This decreased reward response to alcohol arose via two mechanisms: an initial activation of stress hormone receptors and a subsequent increase in inhibitory signalling in the brain. These processes were responsible for causing the rats to self-administer more alcohol after nicotine exposure.

"Young people typically experiment with nicotine from tobacco in their teens, and that exposure possibly contributes to a greater vulnerability to alcohol abuse later in life.

Therefore, greater vigilance is called for to prevent the initial exposure to nicotine and to follow those at risk," said Dani. "In addition, our work suggests that stress hormones are candidate targets for prevention or treatment therapies," said Dani. The study was published in the Cell Press journal Neuron.