Partial molar pregnancy is a condition which may cause life-threatening complications to the baby, here is what you need to know.

When a woman goes through pregnancy, she gets many issues and hormonal changes in her body. It is a very sensitive stage and any small mistake can affect the baby inside the womb. But sometimes there are natural conditions which create obstacle in birth of a healthy child. One such problem is that of partial molar pregnancy. In this condition, the chromosomes are more than generally required or present. Hence it forms issues with fertilization process and thus it needs to be removed from the placenta to avoid any health complications to the mother and child. Let us look at this condition in detail and what can be done to avoid it.

What is partial molar pregnancy?

We spoke to Senior Gynaecologist, Dr. Tanushri Khandelwal from Neera Nursing Hospital, Lucknow to know more about the stage of partial molar pregnancy. This is when the mother gets 69 chromosomes instead of 46. It results to the formation of another partial embryo in the placenta which could create threat to baby’s life and can risk mother’s life too. The partial embryo cannot be developed; hence it needs to be removed as soon as possible by dilation and curettage surgical procedure. 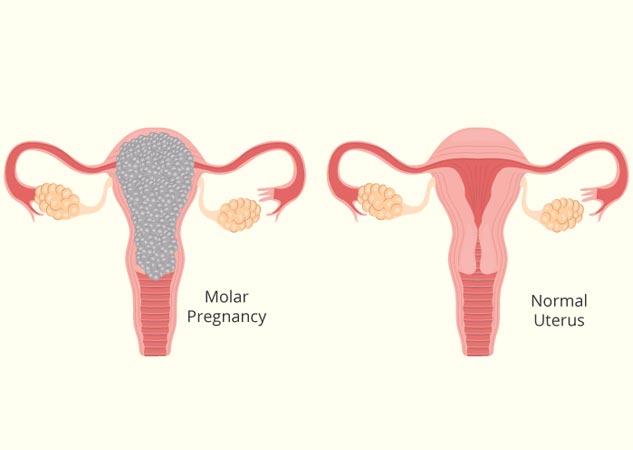 Women with partial molar pregnancy experience a few major symptoms that can determine whether the person has this condition of not.

1. Bleeding- The major symptom for partial molar pregnancy is having dark red or dark brownish bleeding in the first trimester. This bleeding gets more severe if it is not attended upto first few weeks. It may also form cysts in some cases.

2. Nausea and Vomiting- This condition also makes women have constant vomiting from time to time and nausea may also remain for long periods. This could also get more problematic as placenta has tissue which increases tendency of these symptoms.

3. Hypertension and Pelvic pain- Women may also get hypertension because of this condition and this could create health complications. Pelvic pain also becomes evident till the second trimester.

This pregnancy problem is genetic accident and can actually happen to anyone. This does not have a specific cause which can determine why it happens so. Also there are very few women who suffer from partial molar pregnancy and thus it is less likely that you may have this problem. It only occurs to 1 out of 1000 women going through pregnancy. Also it is more likely to happen in women in their early teens or older than 40 years of age. Other factor could be that it is caused in women that have gone through more than 2 miscarriages.

This pregnancy problem has only one treatment that is through the surgical method. A surgery is performed to remove the partial embryo from the placenta of the mother so that the baby and mother can remain healthy and there are no complications. The procedure is called suction curettage.

In this treatment procedure of partial molar pregnancy, the cervix is opened (dilated) and the half embryo is removed from the uterus of the mother. After conducting this procedure, the doctor measures the beta hCG levels of the woman to determine if there is any remainder or tissues left. If everything seems fine, then the cervix is closed and surgery becomes successful. However women should be careful while using birth control methods after this and choose reliable products only.

Can You Get UTI From A Toilet Seat? Dr Cuterus Explains