Haemophilia is a serious blood disorder and you should remain aware of revolving myths, here are some surprising facts you must know.

There are numerous problems that arise in our body but we are not aware of it because the symptoms are hard to determine. Have you ever suffered an injury? You must have right, when blood comes out of your body, it flows out from injury and reduces as clotting happens inside the cells. Now in condition of haemophilia, clotting does not happen properly, because of which you lose more blood. This condition of bleeding disorder is actually called haemophilia. Now many of you are unaware of the true facts behind this condition. Also there are big changes of misinformation about this disorder; hence today we are going to talk about some myths and surprising facts about haemophilia.

Myths and Surprising facts about haemophilia

It is not a disease which has many symptoms; hence you may have misconceptions around it. Let us look at it one by one.

Fact- One of the most common misconceptions about haemophilia is that even small cuts can lead to death. This is not true, because paper cuts are very minor that would not cause blood loss at the level where it could cause complications. One thing you must know about haemophilia is that a person bleeds longer, not faster, so it could be managed easily with taping it well. Another fact which comes along this is that protein which binds the blood together is either missing or does not work. In this case, the bleeding will stop automatically because if you put a band aid on it.

Fact- No, again this is a big misunderstanding and fear among people which persists. The truth is that even haemophilic people live as long as any other person. Due to advance forms of treatment available now, the chances of severity and deaths have reduced rapidly. The improved treatment for haemophilia known as prophylaxis is the responsible for better health condition in people with this blood disorder.

Myth 3- Only Men get Haemophilia

Fact- It is true that haemophilia is more common disorder in men than compared to women; however women also do get this blood disorder. In case of haemophilic women, those who have this disorder tend to get heavy bleeding symptoms which might be more problematic. Therefore if you are thinking that you are safe from this blood disorder being a woman, it’s not going to be true.

Myth 4- It is possible to outgrow haemophilia Also Read: 6 Common Winter Concerns And How To Beat Them

Fact- Interestingly, even though there are therapies available to minimise severity or risks, there is no cure of this blood disorder. It is a genetic disease, which affects your blood in such a way that your blood cannot bind together as genes are defective, if you may call it. People having haemophilia remain in this condition for their lifetime and there are still many researches going on in this blood disorder to improve symptoms.

Myth 5- Haemophilia causes or can cause HIV/AIDS

Fact- A big NO, this is a big misconception which might affect your lives. So here is the actual fact, HIV can spread through a person to another because of being exposed to contaminated blood. This can be only be done through modes of transmission for AIDS, apart from that just by mere coming in contact with blood of person while he may be suffering from an injury is less likely to happen. There have been many studies and researches on this, and there has not been any case where HIV/AIDS could have spread particularly because of person suffering from haemophilia.

Myth 6- Haemophilia is same for everyone 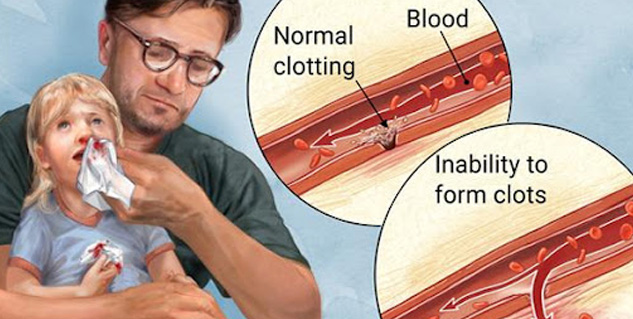 Fact- Another very wrong myth, woman with this blood disorder can also have children like any other mother. However, the risks of complications are comparatively more than usual because of bleeding tendency. Even in case of other blood disorders which are more prevalent in women, normal pregnancy is possible. One should consult her haematologist in the first place because that could direct you of your chances of having a baby and complications, if there are any.