Ketonuria is a condition where ketones are found in the urine of the patient. Excessive ketones in urine are generally a sign of starvation or type 1 diabetes. 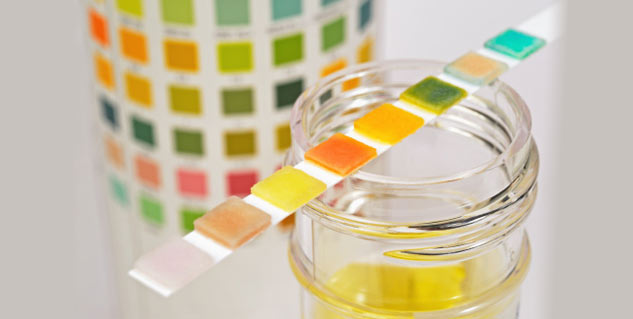 However, during fasting or certain diseases such as type I Diabetes there is glucose shortage in the blood and body resorts to breaking down fats for energy. A high amount of ketones is generated as a metabolic byproduct when fat is the main source of energy. These ketones can buildup in the body and cause further damage. Ketonuria can be a highly dangerous condition if the ketones levels are high. People who have insufficient insulin are more likely to produce ketones. Therefore, people with type 1 diabetes are at higher risk for ketonuria.

When the body is producing low amountof insulin, then the body will start preparing for alternate measure for energy.Due to the lack of sufficient insulin to get energy, the body will start breaking down body tissue into ketones, which can be used as fuel in the lack of insulin. The causes and treatmentof ketonuria differ from person to person and the course of treatment depends on the original cause. Here are some of the most common causes of ketonuria.

Ketonuria is primarily caused by the high levels of ketones in the urines of a person. So everything that can lead to release of high amount of ketones into the blood or urines can cause ketonuria. The most common such causes of ketonuria causes are:

Any condition which causes a reduction in glucose availability in the bloodstream such as diabetes or renal glycosuria can cause accumulation of ketones in blood and consequently ketonuria. In diabetic patients there is not enough insulin to derive energy from glucose and hence body uses alternative sources of energy, producing excess ketones in the process.
Ketogenic diet

Symptoms of the condition vary from person to person, however most of the symptoms are present in a person who has high amount of ketones present in the urine. Following are some of the most common ketonuria symptoms-

Treatment of ketonuria depends on the root cause that is causing excess production of ketones in the body. Ketonuria caused due to dieting or starvation can be treated by taking proper balanced diet high in carbohydrates. For diabetic patients who are suffering from Ketonuria, it is vital to take better measures to manage their disease to reduce ketone levels in the bloodstream.

Ketonuria can be prevented with proper care. Since diabetic people at higher risk of ketonuria, in order to prevent ketonuria it is required to closely monitor the levels of glucose in the blood and ketone bodies in the urine. Although ketonuria is more common primarily in people with type 1 diabetics, it can also occur in type 2 diabetes patients. Therefore, it is highly recommended that all people with diabetes, especially type 1, closely monitor both their glucose levels as well as ketone levels. Over the counter home tests kits are easily available to check both glucose and ketone levels.

While the most crucial step towards managing ketonuria is to regulate the blood sugar and ketone levels, it may not be enough. It is also recommended to make some lifestyle changes in order to better manage ketonuria. One of these most important changes is to avoid ketogenic diet, which is high in fats and low in protein and carbohydrates.

The diet mimics starvation and can easily raise the level of ketone bodies in the blood. The diet is quite common and several physicians recommend it because ketone bodies can prevent or decrease the incidence of many types of seizures, including myoclonic and atonic seizures. However, considering the risk of ketonuria the ketogenic diet is very strict and must be closely managed under a physician's supervision. People who have ketonuria should eat a healthy diet which is low in fat, protein and carbohydrates. Fresh fruits and vegetables are more suitable for ketonuria patients.