A new research suggests that junk food, which lacks nutrition, can make you lazy, just not obese.

A recent study at the University of California-Los Angeles (UCLA) suggests that junk food diets can make you lazy. 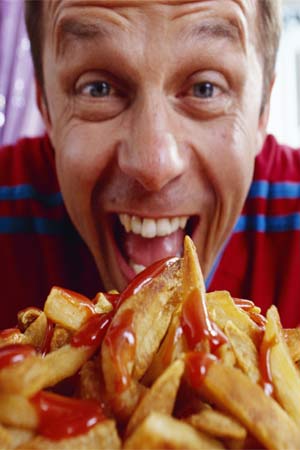 In the trials, the researchers made two groups of the rats. The first group of the rats was fed a normal rat's diet that has unprocessed foods (such as ground corn and fish meal). The second group was given a low-grade quality, processed diet with much more sugar.

After observing them for over 3 months, the team noticed the second group of rats (who were on a junk food diet) became obese. On the other hand, the first group who ate a normal, unprocessed diet did not. In addition to this, the researchers gave the rats a lever task to receive food or water. Those on the junk food diet took much longer breaks than the rats in the other group. This activity was done in a 30-minute session; the second group of rats took breaks nearly twice as long as the first group of rats.

We all experience that lazy feeling after eating a large meal. The study is the first to suggest that consistently eating processed foods and being overweight can leave people with the feeling of fatigue. The research will be published in the journal Physiology and Behavior.

In the follow-up study, the long-term consumption of junk food - highly processed food that is high in sugar was found to be linked with cognitive impairment. The researchers switched the two groups' diets after 6 months. Now, the obese rats were given more nutritious diet unprocessed foods (such as ground corn and fish meal) for 9 days, while the lean rats were fed the processed junk food diet.

Despite of the change in diet for the obese rats, their weight did not improve, nor did they respond better to the lever task. The other group, after they ate junk food for 9 days, their weight did increase and their responses to the lever task did not become impaired. The finding suggests that a long-term pattern of eating junk food is to blame for obesity and cognitive impairments, and not the short-term eating pattern. Besides, the rats on the junk food diet had a large number of tumours in their bodies by the end of the study. The rats on the nutritious diet had fewer, smaller tumours.

As rats have physiological systems similar to humans, the study findings may apply to humans.

According to the lead researcher, Aaron Blaisdell, we live in an environment with sedentary lifestyles, poor-quality diet and highly processed foods. The sedentary lifestyles along with poor dietary choices are the reasons behind chronic diseases, including obesity and diabetes.

The populations and individuals should adopt healthy dietary choices and make efforts for a healthy weight. Energy intake from total fats, the intake of free sugars and salt should be limited, whereas, the consumption of fruits and vegetables, and legumes, whole grains and nuts should be increased.