How Does Smoking Cause Lung Disease

Tobacco smoke contains harmful chemicals such as nicotine, carbon monoxide and arsenic which can negatively affect several organs in your body, especially the lungs. 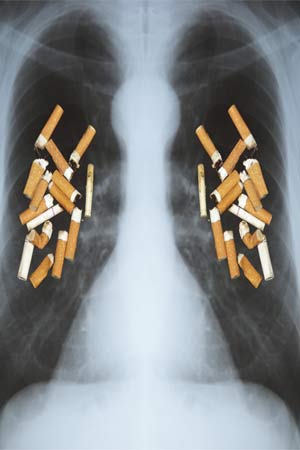 According to a report by US Department of Health and Human Services, smoking is the cause of chronic obstructive pulmonary disease (COPD) in nearly 90 percent of reported cases. Cigarette smoke has over 4,800 chemicals, 69 of which are identified to cause cancer. Nicotine is one of the ingredients in cigarettes that cause addiction. Smokers not only get physically addicted to nicotine but associate smoking with their social activities, only to make it a habit that is difficult to break.

As you smoke, airways in the lungs narrow and become irritated. Smoke from tobacco damages the airways in the lungs and interferes with its primary function. It becomes difficult to breathe out carbon dioxide. Smoking addiction may damage cilia, the tiny structures that move oxygen in cells through blood. As a result, not enough oxygen reaches your body parts. Moreover, smoke inflicts damage to the air sacs and may eventually destroy the lungs owing to lack of oxygen.

Smoking ups the risk of lung diseases, including lung cancer, but also puts one at greater risk of medical conditions such as heart disease, emphysema, stroke and oral cancer. The lung diseases associated with smoking are:

Emphysema – Emphysema affects the air sacs in the lungs (alveoli) and is characterised by shortness of breath, cough, fatigue, and sleep and heart problems.

Lung cancer - Lung cancer is a continual multiplying of cells that can result in lumps, masses, or tumours. It begins in the lining of bronchi (large airways) and may cause persistent cough as the tumour grows. The symptoms of this cancer form include constant chest pain, shortness of breath, recurring lung infections, repeated chest infections, coughing, bloody sputum, swelling of the neck, fever and weakness in shoulders.

The above complications are the signs of the damage that smoking does to your lungs. When you suspect these signs of smoking, see your doctor. If you don’t seek medical advice and treatment on time, the symptoms may get worse.

How can you kick the habit?

Smoking doesn't just damage your lungs, but also puts you at high risk of other serious disease including cancer. Quitting smoking may require multiple attempts. If you are finding it difficult, seek counselling to kick the habit.

Even if you’ve been smoking for quite a long time, it's never too late to quit. Stopping now can make all the difference and reduce your risk of cancer, lung and heart disease. When you quit smoking, you stop your lungs from getting even more damaged. Believe that you can quit. Ask your family and friends to support your decision to quit. The techniques such as nicotine patches, medical intervention and support groups are some of the approaches that can help you quit smoking.