How does a Person get TB

How does a Person gets TB: A person infected with the bacteria Mycobacterium tuberculosis develops TB. People with weak immune system are more prone to show symptoms. 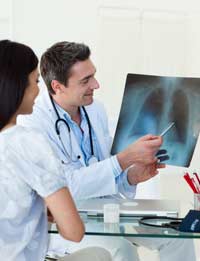 The bacteria responsible for tuberculosis spread through the air is called mycobacterium tuberculosis. It is released in the air when an infected person sneezes, spits, coughs, or even shouts. Any person in the vicinity of such a person runs the risk of inhaling the bacteria. The incubation period of TB can last for as long as a few years. This infection does not spread by touch. The only way in which this bacteria infects new people is through inhalation.

Tuberculosis or TB is an infectious disease which mainly affects the lungs, but can also affect other organs in the central nervous system, circulatory system and lymphatic system and others. There are many antibiotics available to treat the disease these days, but how does a person get TB, in the first place? This is important for devising ways to guard against getting the infection.

People who have strong immune systems remain unaffected by the bacteria. Their immune system destroys the bacteria. Some others are able to live with the infection without showing any symptoms. Although mostly developed as a result of bacterial infection acquired inhalation, there is another form of the disease which infects a person after he drinks unpasteurised milk. The bacteria in this case are also different. It is called Mycobacterium bovis. Children used to be infected with this a lot when the milk was not pasteurised.

People who are more likely to get the infection include:

The group of people enlisted are prone to getting the infection as their professional or medical circumstances makes them more vulnerable to it. When infected, they show symptoms such as unexplained tiredness, weight loss, fatigue, fever, shortness of breath, night sweats, chills, and loss of appetite. If infection is in the lungs, symptoms include problem of coughing up blood along with chest pain, pain while coughing and even breathing.