How Does a Girl Get Pregnant

How does a girl get pregnant: A girl gets pregnant in the natural biological process which begins from ovulation and ends in formation of embryo. It is important that you are aware of this process to satisfy the curiosity of your sexually active t 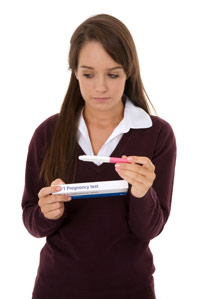 The first process in the reproductive system is ovulation. If a woman is not ovulating, i.e. releasing eggs from her ovary, there is no question of her getting pregnant. There are some times of the month when there is no egg present for fertilisation. In a normal ovulation cycle, ovulation starts 14 days after the beginning of your last menstrual cycle. If you want to answer, “How does a girl get pregnant?” often the query of some teens, you can do with some basic information given here.

Process of getting pregnant

Women who experience early symptoms of pregnancy, such as fatigue, nausea, headache, morning sickness or tenderness of breasts, should get a pregnancy test. The most tell-tale sign is missing a period. At times women mistake spotting, i.e. bleeding after implantation of egg to the uterine wall, to be the symptom of their normal period.

On testing positive, you need to decide about the next steps to take. Bear in mind that the earlier you learn about your pregnancy, the better it would be in helping you prepare. If you are mother of a daughter wondering about how early can a girl get pregnant, know that if she is sexually active, it can happen as early as 8 years of age as found in some cases.

Read more articles on How to get Pregnant