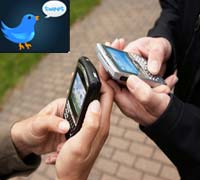 Scientists from the University of Vermont have revealed that Twitter users are likely to be less happy than what they used to be prior to joining the social networking site. The scientists analyzed more than a billion tweets that were updated over three years and found out that the happiness quotient of the respective Twitter users was cascading. Although, it may seem incoherent to nail an individual’s mood through their tweets on Twitter, the study appears to have corroboration.

The scientists analyzed the word content of over 4 billion tweets posted by 63 million Twitter users all over the world. The tweets were updated during September 2008 to September 2011. The volunteers involved in the study read the tweets and rated the quality of “happiness” in the tweets  with the help of a scale than ranged from 1 for ‘saddest’ to nine for ‘most happy’.

Apart from the scale of sad-to-happy ruler, the scientists also applied mathematical formulae to the number of tweets collected. They observed that there was a gradual downward trend in the quality of happiness after a constant upward trend in the same. The tweets were apparently dropping in the quality of happiness during the bailout of the U.S. financial system in 2008. The decline was also observed when the H1N1 flu pandemic had hit in 2009. The death of Michael Jackson was also a major reason for the drop in happiness quality. An interesting part of the study was that the scientists observed the lowest happiness day when Osama Bin Laden had died in 2011.

The happiest day/s of the week, according to the study, was Saturday, Friday and Sunday and the least happy day was observed to be Tuesday. The study revealed the happiest hour of the day to have been 5-6 a.m. as that is the time when people used more positive words in their tweets than negative words. Happiness had dropped by noon and was even lower at night.

The swearing pattern of the tweets became a ritual with most swear words being used at 1 a.m. and the least between 5 a.m. and 6 a.m. The study, as put by one of the researchers, was a key to understand or suggest the gradual, on-average and daily unraveling of the human man, at least among those active on Twitter.