Go for Pseudo-Grain Power This Navratri

Pseudo grains like Amarnath, Samak, and Chestnuts are nutritious alternates to wheat, rice and millets; this makes them a very favourable option to be consumed during Navratri.

"Nava-ratri" literally means "nine nights." This festival is observed twice a year, once in the beginning of summer and again at the onset of winter. 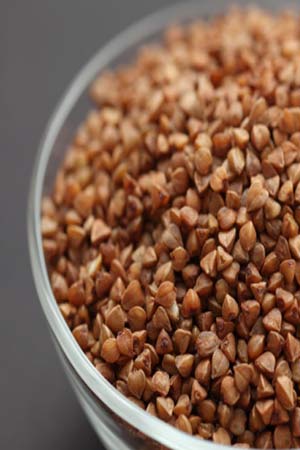 Navratri fasting rules varies little from community to community. During this time, grains and cereals are worshipped in the form of grass and eating them is avoided. People observing these fasts replace their meals from rice, wheat and millets to alternative cereals such as buckwheat, chestnut, sago, amaranth and a special variety of rice, known as samak rice (Barnyard millet).

Amarnath, chestnuts and samak are seeds of fruits and not real cereals, getting the name of pseudo cereals. It is because they do not grow in grass like wheat and rice.

In fact, a study called “Nutritive value of pseudocereals and their increasing use as functional glutenfree ingredients” published in the Journal Trends in Food Science & Technology 21 (2010), concluded that a variety of gluten-free whole grains such as amaranth, quinoa and buckwheat include high quality protein and abundant quantities of fibre and minerals such as calcium and iron. Moreover, they are also a source of many bioactive compounds with health-promoting effects such as phytosterols, polyphenols, saponins and squalene.

Let’s see why it is beneficial for our health to include these pseudo grains in our diet during Navratris.

This pseudo grain has a corn-like aroma and woody flavour which makes it suitable for breakfast cereal and porridge-like dishes.

It can also be ground into flour, which, in turn can be used to make breads, chapattis or parathas. The flour is usually ground along with its hull, which helps retain most of its nutrients.

Protein content in amaranth and quinoa is generally higher than in common cereals such as wheat; and is usually highest in amaranth followed by quinoa and buckwheat. It is also high in dietary fibre, iron, magnesium, zinc, calcium and B-vitamins.

Buckwheat chapattis, poories or pakoras are very popular during Navratri owing to its nutty flavour. It also tastes delicious as a hot cereal.

In particular, dietary fiber content is significantly higher in buckwheat seeds in comparison with amaranth and quinoa, which have fiber levels comparable to those found in common cereals.

It is a highly nutritive fruit, which is a good source of carbohydrates, calcium, phosphate, iron, copper, manganese, magnesium, sodium and potassium. The benefits of water chestnut flour can be enjoyed in the form of chapattis or pancakes.

Sabudana comprises of small balls of starch prepared from the inner trunk of palm tress. It can be consumed as it is or in ground form. Sago has thickening properties which makes it suitable for thickenming soups, sauces, stews, puddings, snack food, or desserts.

It is predominantly carbohydrate with very little protein, vitamins, minerals and fat baked in breads, pancakes or biscuits.

Samak is a  seed and not grain. It is high on calcium, potassium, phosphorus and amino acids except lysine. It is usually eaten with hull, which retains majority of its nutrients. Samak rice can used to make kheer, khichdi, idli or dhokla.