Fibroids during pregnancy can cause additional discomfort to a woman's abdomen. If not detected or treated on time, fibroids can lead to intense pain and bleeding and can result in a number of delivery complications. 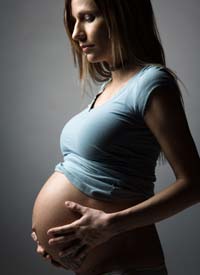 Fibroids, which are also called leiomyomas, fibromyomas or myomas, are non-cancerous tumours that grow on or in the uterus wall. Out of four women, at least two suffer from fibroids once in their lifetime. Thus, fibroids are not unheard of. Some women experience fibroids during pregnancy. It doesn’t affect foetus growth and development and in some cases, it causes no symptoms or only mild symptoms. Here we have discussed how fibroid symptoms during pregnancy can wreak havoc in some cases.

Formation of fibroids adds to the already great discomfort caused by intense pressure and weight of a growing foetus, which a woman carries in her abdomen. Mass of the fibroid exerts additional pressure on woman’s abdomen and further restricts her from making movements. Fibroids start developing in the uterus usually in the early weeks of pregnancy due to increased blood flow to the uterus. By second trimester of pregnancy, their blood supply outgrows and results in sudden and sharp pain.

Pain due to uterine fibroids can sometimes be accompanied by bleeding during any week of the pregnancy. This may be mistaken as a miscarriage. Thus, if unfortunately a woman experiences bleeding and pain together during pregnancy, she must consult her gynaecologist immediately.   Excessive blood loss during pregnancy is a threat to the health of the mother as it can lead to lower iron levels (anaemia) or reduced blood count. However, these conditions are not symptoms of fibroids and are commonly experienced by many women during pregnancy.

Blood loss due to fibroids can lead to dangerously low blood level in the mother, also reducing blood supply to the foetus, which can be fatal for it. Women experiencing bleeding due to fibroids must be monitored closely by their obstetrician to determine the treatment course and its suitability.